When you watch a really well done action film, plot inconsistencies and iffy acting can fly past and you won’t mind one little bit. Consider the 1985 thriller “Runaway Train”. The story could hardly be simpler – two criminals break out of prison and escape on a train, with the warden in hot pursuit. Not much to that story, but it’s the backbone of a totally unique thriller. – One whose images stay with you long after you’ve seen it.

Jon Voight stars as Manny, who is a lifer at a maximum-security prison in Alaska. We find out as the story opens that he has just won a court challenge to be released from solitary confinement into the general prison population. He has just spent the past 3 years with his cell welded shut, courtesy of Rankin, the prison’s sadistic Warden. The dynamic between these 2 men is established early, as Rankin delivers the news of his court win to Manny. “I hope you try something – I will send you out of here in PLASTIC!!” Manny, in fact, IS planning something – He immediately starts to work on breaking out, with the help of the slow-witted trustee Buck (Eric Roberts). Once out, the two have to make on a cross-country trek through brutal winter conditions, until they happen upon a remote train station. They jump on the titular train, and the film settles into its groove.

The two have unknowingly picked the worst possible train, as the conductor dies of a heart attack shortly after they start moving, and the locomotive starts to pick up speed. Here the film picks up a second plot thread as a railroad dispatcher office discovers the out of control train and begins to try to deal with it. Believing the train to be unmanned, the dispatchers make plans to de-rail it, and instruct an on-site switchman to switch it onto another track. However, in waiting for it to arrive at the switch, he hears the whistle blowing, and in a memorable scene holds his radio handset out the window for the office to hear. The switch is narrowly averted.

Manny and Buck are as surprised as we to hear the whistle, and this leads to the discovery of a third person on the train – A female railway worker. The girl is able to provide us with some valuable information – The train can be slowed down by unhooking the locomotives one at a time, but you can’t get from the second to the first engine because there are no handrails. 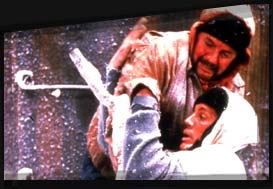 By this time, Rankin is in pursuit via helicopter, and we begin to see how the film parallels he and Manny. In surmising that Manny has jumped on a train, Rankin says with glee “He’s doing exactly what I would do.” Rankin finally catches up to the train and climbs down a rope ladder in order to board it. This sequence is simply spectacular, as the train hurtles through a snowy mountain pass, with the man hanging from the chopper above it. Manny has managed to get to leap to the front engine in the meantime, and it’s here where the final confrontation with Rankin takes place. The two men battle, and Rankin ends up handcuffed to the train. Rankin hurls insults at Manny, but it’s clear that Manny is now in a place where he can’t be touched.

“You’ll die with me”

“Fuck you! You’re as afraid to die as anyone else! And I never let you free”

I mentioned at the beginning of this piece that you will overlook a lot of stuff if a film grabs you by the cajones. “Runaway Train” is far from a perfect film. Rankin is painted as a bit too much of a cartoon sadist, and Eric Roberts’ Buck is best taken in small doses. If you look beyond those things, you see marvelous images and stuntwork, and a tour de force performance by Jon Voight. There is a quiet moment where Manny listens to Buck go on about what he’s going to do on the outside, then interrupts with a marvelous monologue about the reality about what their lives have become and how Buck will end up with some menial job. “And you will treat that job like gold, because it IS gold.” When Buck asks why Manny doesn’t do the same, Voights’ answer is simple, beautiful and wistful - “I wish I could.”

In a film chock full of memorable images, however there is one that stands out above all the rest, and that is the final one. A quote from Richard III appears onsceen as the train and its two occupants fly off to their ends. “No beast is so fierce but knows some touch of pity. But I know none, and therefore I am no beast.”

Night and the City

If you are interested in movies, sooner or later you need to experience Film Noir. Noir’s universe is one populated by those on the fringes of society – Those to for whom an easy buck or a quick lay is what keeps them going. ”Night and the City” was released in 1950 at the zenith of the Noir era, and it belongs on any short list of the best ever made. Many of the signposts of Noir are present, but NATC reaches beyond them. It’s got a lot of meat on its bones.

The man standing at the centre of the film is Harry Fabian, wonderfully played by Richard Widmark. Harry’s job is as a “tout” for a gentlemen’s club, but he knows in his heart that he has big things ahead of him. We first meet him as he is going through his girlfriend’s purse, looking for cash. He needs it for his latest venture – a greyhound track, which he describes as “A sure thing!” The girlfriend (Gene Tierney) has plainly heard all this before.

You don’t have to watch the film for long to realize that Fabian always has his eyes and ears open. Working the crowd at a wrestling match, he sees a disagreement between the legendary wrestler Gregorious and his promoter son, Kristo. Harry moves quickly and has corralled Gregorious for a drink before he has even left the arena. A new scheme has been hatched – Harry will control wrestling on London, with Gregorious shielding him against Kristo. The greyhound track never gets mentioned again.

Harry Fabian is a great character, and “Night and the City” is a great movie, but its true genius lies in the way director Jules Dassin has crammed it full of truly great supporting roles. Most notable amongst these is Phil Nosseross, Harry’s boss at the Silver Fox men’s club. Nosseross sits in his glass cubicle at the club, running things in a quiet, measured way. Fabian comes first to him for money, and Nosseross laughingly tells him to bring in 200 pounds and he’ll match it. Nosseross clearly believes that he’s safe in making this promise, but he doesn’t yet realize that Harry has an ally – Nosseross’ wife. Harry soon is back with his 200, and in a sublime little scene, Nosseross goes to a closet, and sees that the fur coat that he has bought his wife is gone. You can see the tumblers clicking into place in his brain, as he realizes where the money has come from – and that she is going to betray him.

The wife has her own plan – To use Harry to get a license so that she can start her own club and leave her husband. She, of course has chosen the wrong partner. Harry has a forger friend produce the license, and he cons her into thinking it’s genuine. The new club is up and running, and she has left her husband when the truth of Harry’s handiwork is revealed to her. 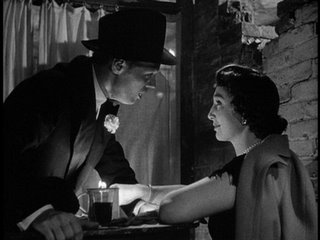 Then there is the matter of the wrestling promotion. Harry has Gregorious and his young protégé Nicholas under his thumb, but realizes that he needs a popular wrestler named the Strangler to guarantee a good gate – And Strangler is under contract to Kristo. Harry contrives to provoke the Strangler into a rampage, and has him rush to the gym to confront Gregorious. Harry wants to create an atmosphere where Strangler agrees to sign with him just to get at Nicholas, but he gets more than he bargained for, as Nicholas breaks his wrist in a struggle, and Strangler and the elderly Gregorious engage in a lengthy wrestling match. Gregorious finally overpowers the younger man, but at a terrible price. Kristo appears in the gym just in time to see his father collapse. This scene is strangely poignant, as the old wrestler dies in the arms of his estranged son, who we have theretofore only seen as an icy businessman.

The death of Gregorious seals Harry’s fate, and soon he has a price on his head, and is being pursued by what seems to be the entire London underworld. Harry is hiding out in a houseboat, despondent and exhausted when his girlfriend finally finds him. Literally surrounded by his enemies, Harry decides to try to make some right out of his life. He can still arrange it so she can live a live of plenty. He runs from his hiding place screaming “She’s turning me in!” “She’s cut my throat!” …. And promptly runs right into the arms of the Strangler.

NATC is my favorite Noir – by a country mile. Harry Fabian is essentially a snake, but he means well. He’s smart, but foolishly reckless about what he goes after. His girlfriend tells him at one point ”You could be anything” , and we sense that’s true. Back when he thought he was making a big score, Nosseross tells him something that is really his epitaph. “You’re a dead man, Harry Fabian. You’ve got it all, but you’re a dead man.”

Posted by Jeff Duncanson at 8:29 a.m. No comments: