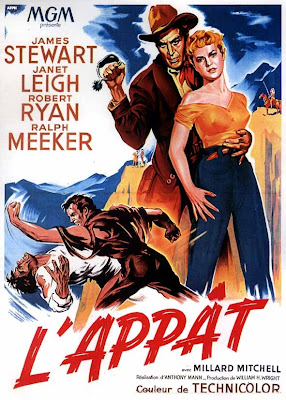 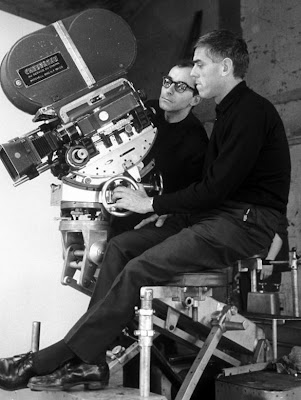 Jean Luc Godard and Raoul Coutard at work on Pierrot Le Fou.
Posted by Jeff Duncanson at 2:53 p.m. No comments: 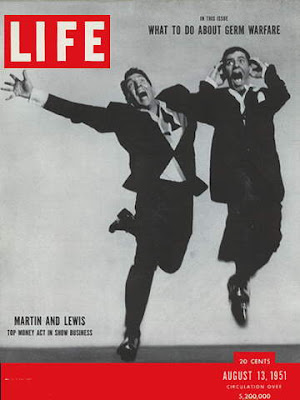 Brian DePalma goes far and wide for the inspirations for his 1981 thriller Blow Out. A cursory glance reveals the JFK assassination, the Ted Kennedy Chappaquiddick affair, Antonioni’s Blow-Up, and Coppola’s The Conversation. DePalma’s critics have always cited him as a rip-off artist, and this is true, but it’s hardly the point. Dismiss this film for all its admittedly obvious homages, and you are passing up on a great piece of craftsmanship.

Like the Antonioni and Copolla films, this one revolves around a crime witnessed by someone who doesn’t at first comprehend what has happened. In this case it’s movie sound man Jack Terry (John Travolta). It’s pure chance that has him recording nighttime sounds when he hears a loud bang, followed by a car careening of a bridge and into deep water. Terry tries, but is only able to save one of the cars two passengers, a girl named Sally (Nancy Allen). 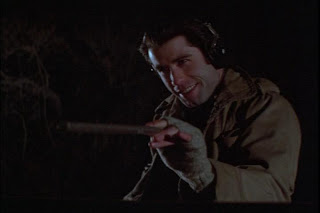 Ah, but this is no ordinary accident. The dead man is a high profile presidential contender, and Sally is NOT his wife. Terry starts to suspect something is amiss at the hospital when one of the dead mans aides pulls him aside and basically tells him to forget that there was a girl in the car. The lie is proposed as a way to avoid embarrassment for the family, but Terry suspects that there’s more to it. He heard a shot, after all….

The trail leads to a shady photographer, who also happened to be at the scene (with camera), and to a named Burke, played with icy malice by John Lithgow. When the photog’s pictures make it into a news magazine, Terry hits on the inspired idea of piecing the photos together with his recording to create a crude film of the accident. This virtuoso sequence is the centerpiece of Blow Out, as he recreates the crime from scraps, and we see, conclusively, that there was a gunshot. In the Antonioni film, there is the very real possibility that the crime involved never happened. In The Conversation, there is only the suggestion that something MAY happen. When it does, it’s not what we expect. Blow Out is much more a straightforward thriller that the other two. The reconstruction confirms what Jack already knows. 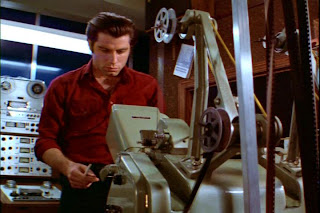 The Burke character mentioned above is the wild card in all this. He was the one with the gun that night, and as the true nature of the events threaten to become public, he takes things into his own hands. There is the suggestion early on that the blackmail attempt was sanctioned by the President himself, or at least by a close advisor. Burke tells this advisor that “I was forced to exceed the parameters” of the original plan. This involves creating a serial killer scare, complete with a couple of innocent victims. The second of these murders, committed in a public restroom, is likely the most memorable moment in the film, as we see only the victim’s thrashing feet as Burke garrotes her. 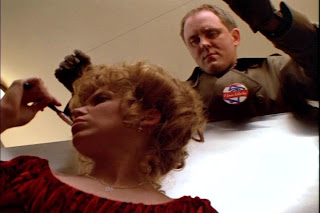 Watching this film, I was stuck by DePalma’s techniques. When we see the original accident, it is drawn out. Kelly records a romantic couple, then a frog croaking, then an owl. The owl abruptly turns it’s head, as if it hears something, then we hear the speeding car approaching. When he reconstructs the events in his lab, and we see them again, the perspectives all change, and this time we see the car a lot earlier. It’s subtle, but it indicates Kelly is imposing his own ideas on what he is hearing. There are a lot of instances where the action is seen or even heard through glass, subtly suggesting that the events are being refracted, or slightly misaligned. DePalma even goes to lengths to show the photographs being put under panes of glass during the reconstruction sequence.

There’s a brief flashback sequence early on where Jack recounts an incident from his time working with the police. In it, an undercover cop lost his life because of an improperly installed wiretap. The sequence doesn’t really draw attention to itself, and its importance only becomes clear at the film’s close, when Jack is once again forced to sit helplessly and listen to someone perish due to his mistake. This idea is sort of another DePalma borrow, in this case from Hitchcock’s Rear Window, but it works beautifully here.

It’s difficult to watch Blow Out and not have a strong opinion of how it ends. It returns to the images that opened the movie, and involves the difficulty a film director has finding a female scream effect for a shower scene. Without ruining for anyone, it’s fair to say that the Kelly character does something that could be construed as a supreme act of callousness…or a supreme act of love. In the spirit of the movie, I prefer to think of it as the latter. Let’s call it an homage.

Posted by Jeff Duncanson at 7:46 p.m. No comments: 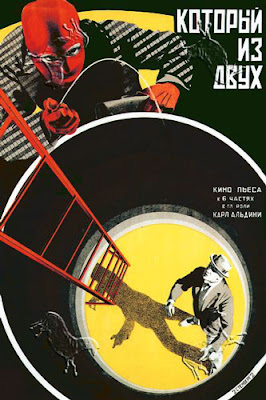 Posted by Jeff Duncanson at 9:33 a.m. No comments: