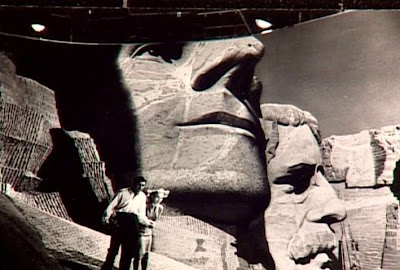 Cary Grant and Eva Marie Saint on the great Mount Rushmore set for North By Northwest.
Posted by Jeff Duncanson at 9:56 a.m. No comments: 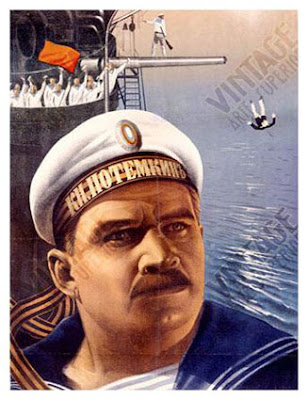 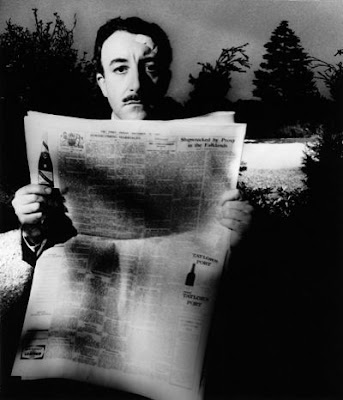 Film scholars have always accorded Robert Bresson a spot in the upper echelon of directors, but it took me a while to understand why. My first experiences with Bresson were his two best-known films, Pickpocket and Au Hasard Balthazar, and both left me flat. I was turned off by the emotionless protagonist of Pickpocket, and just plain depressed by the treatment endured by the “donkey Christ” of Balthazar. Something clicked, however, when I watched Bresson’s final film, L’Argent. It’s a simple tale of a man whose stubborn pride causes his whole life to unravel, and in viewing it, I finally felt that I was starting to understand Bresson’s uncompromising take on Christian mores. Which brings me to 1956’s A Man Escaped. On the surface, it’s a prison break movie, but in Bresson’s hands, it’s also a meditation on faith and community. 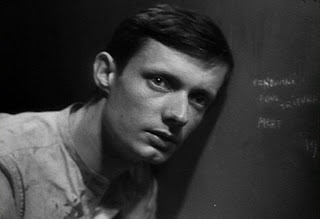 Set in France in 1944, it is the tale of Fontaine, a French resistance fighter who has been captured and imprisoned by the Nazis. Fontaine has no illusions about how his incarceration will turn out – He will eventually be shot, and so his entire being is focused on his escape. He sets to work on the long process of chiseling away his heavy oak cell door with a tool fashioned from a spoon, and the film lingers on the work. Fontaine knows that his freedom will be hard earned and slow in coming, but he is relentless in working towards it.

We start to meet a few of the other inmates during their regimented life. There is a priest, whose faith is rekindled because of his support for Fontaine’s quest. There is Fonatine’s neighbor Orsini, who plots his own escape, and gives his life to supply some helpful information on getting out. Finally, there is Blanchet, an old man who occupies the cell next to Fontaine. Fontaine tries in vain to communicate with this man for a great part of the film. He taps on the wall, and gets no response. He tries to talk across their two outside windows, and gets no answer.

One day the old man falls when emptying his bathroom bucket, and Fontaine helps him to his feet. A tentative relationship begins to emerge between the two men, and they start to talk a bit between their cells. Fontaine reveals his plan to escape, and Blanchet, worn down by years of imprisonment, tells him that his plan is nonsense. Bresson shoots these passages from outside the prison walls to accentuate the separation of the two men, and one is left with the feel of a confessional.

Fontaine periodically hears the sounds of someone being shot, just to remind him that death isn’t far away. The film never shows us an execution, however. Somehow it’s fitting that in the case of a friend that you know from tapping coded messages, his death is only experienced by sound. Such is the world of solitude that AME portrays.

The people in Bresson’s films never showed much emotion, and that was by design. Bresson wanted you to arrive at your own conclusions, instead of being led by an actor. As Fontaine, François Leterrier is another in that tradition. He’s an enigma in this film. We never learn a single thing about his life outside prison, apart from the fact that he’s a freedom fighter. There is never any indication that he has a wife or family on the outside. He seems to want to escape only to continue his work.

Fontaine’s quest takes an unexpected turn one day when he comes back to his cell and finds a new roommate – a young French Nazi army deserter named Jost. This, or course puts his work in a whole new light. He actually spells it out for us in his narration. He has two choices – Jost can escape with him, or be killed. 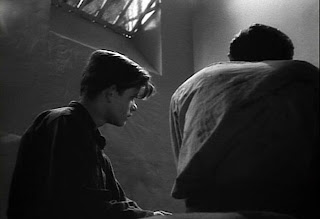 The exchanges between these two are where the heart of the film resides. Jost speaks of his family, and what he has lost, and this amplifies the fact that Fontaine hasn’t spoken of his. Perhaps he doesn’t even have anybody on he outside. In any case, he reveals the plan to escape to the young man, and it is now clear that in addition to his own escape, Fontaine sees delivering Jost back to his family as a spiritual crusade. 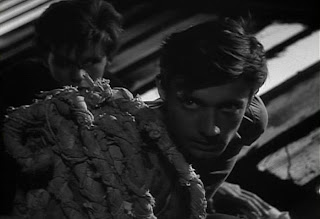 Do the two men make good on their escape? The film’s title would seem to pretty much give that plot point away, but AME is about much more than steel and concrete. It’s about how this man rekindles hope in men who though that they were beyond it. After scoffing at Fontaines plan, Blanchet ends up providing help, as does the priest. A Man Escaped is about the power that people have when they band together. And that’s easy to understand. 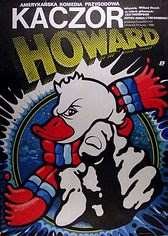 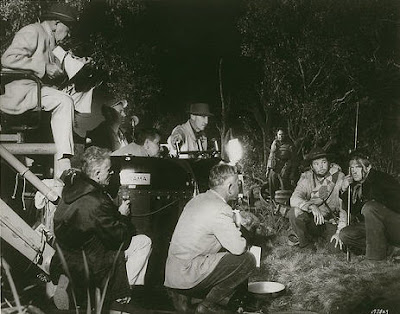 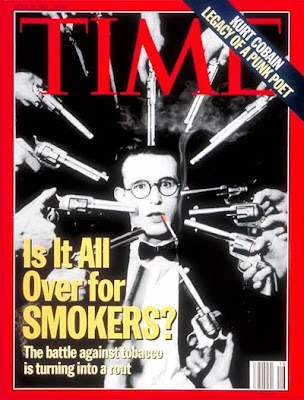 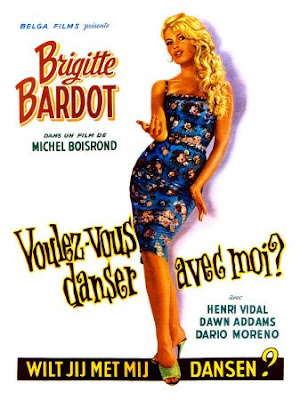 On This Date / Dialogue I Love 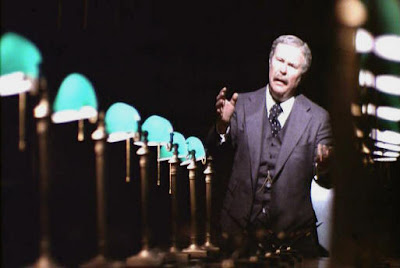 A happy 70th birthday to Mr. Ned Beatty. In his honour, I present his great monologue from Network. You have meddled with the primal forces of nature, Mr. Beale, and I won't have it, is that clear?! You think you have merely stopped a business deal -- that is not the case! The Arabs have taken billions of dollars out of this country, and now they must put it back. It is ebb and flow, tidal gravity, it is ecological balance! You are an old man who thinks in terms of nations and peoples. There are no nations! There are no peoples! There are no Russians. There are no Arabs! There are no third worlds! There is no West! There is only one holistic system of systems, one vast and immane, interwoven, interacting, multi-variate, multi-national dominion of dollars! petro-dollars, electro-dollars, multi-dollars!, Reichmarks, rubles, rin, pounds and shekels! It is the international system of currency that determines the totality of life on this planet! That is the natural order of things today! That is the atomic, subatomic and galactic structure of things today! And you have meddled with the primal forces of nature, and you will atone! Am I getting through to you, Mr. Beale? You get up on your little twenty-one inch screen, and howl about America and democracy. There is no America. There is no democracy. There is only IBM and ITT and AT&T and Dupont, Dow, Union Carbide and Exxon. Those are the nations of the world today. What do you think the Russians talk about in their councils of state -- Karl Marx? They pull out their linear programming charts, statistical decision theories and minimax solutions and compute the price-cost probabilities of their transactions and investments just like we do.We no longer live in a world of nations and ideologies, Mr. Beale. The world is a college of corporations, inexorably deter- mined by the immutable by-laws of business. The world is a business, Mr. Beale! It has been since man crawled out of the slime, and our children, Mr.Beale, will live to see that perfect world in which there is no war and famine, oppression and brutality --one vast and ecumenical holding company, for whom all men will work to serve a common profit, in which all men will hold a share of stock, all necessities provided, all anxieties tranquilized, all boredom amused. And I have chosen you to preach this evangel, Mr. Beale.

Because you're on television, dummy. Sixty million people watch you every night of the week, Monday through Friday. 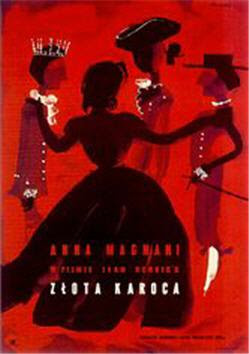 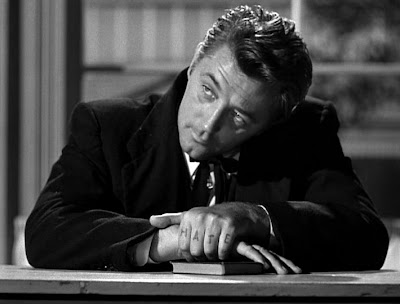 In my ongoing quest to not become bored silly whilst doing this blog, I have decided to do a periodic feature on my favorite film villains. As such, there’s only one place to start. The Reverend Harry Powell from Charles Laughton’s Night of the Hunter.

As personified by Robert Mitchum, Powell is a righteous avenging angel doin’ the Good Lord’s duty. Powell doesn’t see any problem with robbing and murdering widows to finance his work: It’s God who delivers them to him.

If NOTH were made today, the Reverends’ sexual hang-ups would be a bit more front and center. As is, they are still there, but you have to read between the lines a bit. Take an early scene where Powell watches a stripper perform. His fists clenched and his teeth gritted, Powell watches in a silent, indignant rage. The payoff is when his switchblade fires through the fabric of his coat – a priceless Hays Code-era phallic metaphor. For all his anger, it never occurs to Powell to get up and leave, and the knife tips us off to why that is.

Then there’s the classic wedding night sequence with Shelly Winters. Winter’s Willa Harper gets the surprise of her life when she learns that Harry is not interested in having sex with her….EVER. This sexual revulsion that Powell has twisted around and turned into a murderous crusade makes him a truly frightening original. The Marquee (Kurosawa twice over) 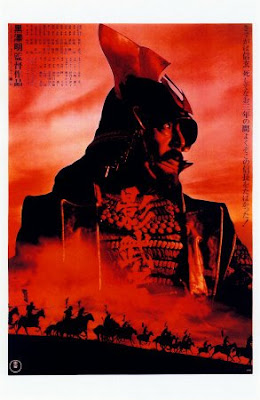 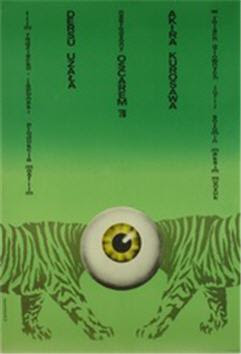