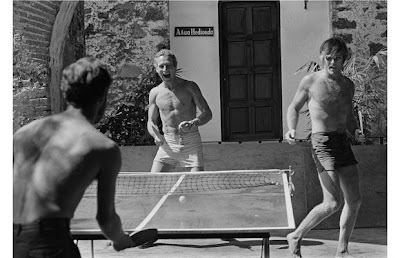 Butch and Sundance play ping-pong.
Posted by Jeff Duncanson at 9:02 a.m. No comments:

James Mason
Posted by Jeff Duncanson at 6:52 p.m. No comments:

Julie Newmar
Posted by Jeff Duncanson at 10:56 p.m. No comments: 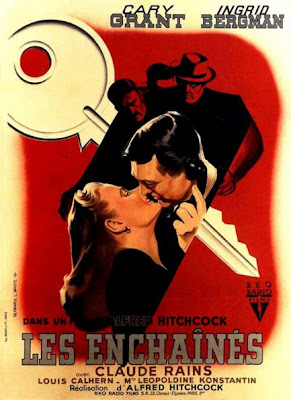 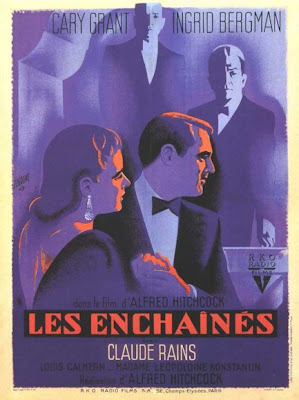 Posted by Jeff Duncanson at 8:36 p.m. No comments: 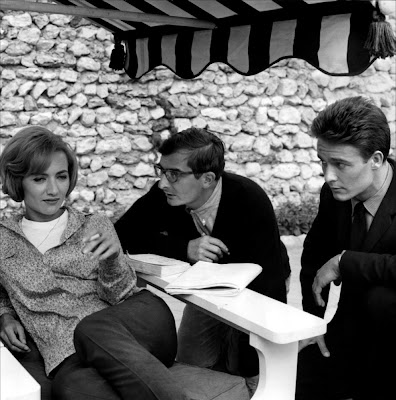 Synecdouce, New York – I’m not even sure how to start to write something about this film. It’s not so much about anything as about EVERYTHING: Death, sickness, marriage, loneliness, and parenthood. I admired the way writer/director Charlie Kaufman throws away conventional narrative techniques to tell the story. In this way, it reminded me a bit of Godard at his best. On the other hand, I started getting fidgety towards the end, and I was surprised to go back and discover that what I assumed to be a 3 hour film as in fact only a tick over two. I know this is being hailed as a masterpiece, and it might well be one, but I think I need to see it again to decide. 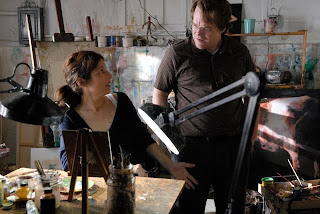 – Another Chabrol seen for the first time. This one concerns a bizarre love triangle between a reclusive billionaire (Orson Welles), his troubled son (Anthony Perkins), and his sexy young wife (Marlene Jobert). Welles is a God figure, and other Biblical references pop up everywhere, including the Garden of Eden, the destruction of graven images, and even a crucifixion. There’s also a lot of stylish cinematography by Jean Rabier. Recommended. 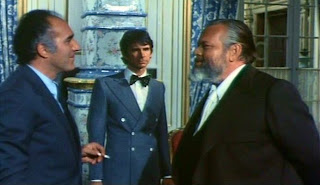 Le Samorai – This was the first Melville film I ever saw, and although I liked it well enough, it didn’t knock me off my seat the first time. My Melville fixation started with Bob Le Flambeur, and it has made me go back and revisit this one a couple of times. Alain Delon’s ultra-cool killer is still impossible to get close to, but now I see more clearly why he’s portrayed that way. This man strives for invisibility, whether he’s stealing a car or staking out a hit in a crowded nightclub, and emotion draws attention. One plot point that I had forgotten about was the bird in his apartment. I think that’s his concession to emotion, because in his own way he cares about this tiny animal. Recommended. 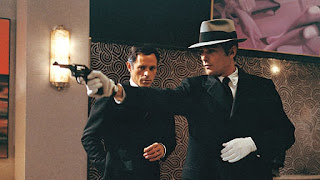 Le Boucher – Claude Chabrols’ great 1970 film is a macabre dance between two damaged people. First, a butcher, who is also a serial killer. A teacher, who has her own sexual baggage, enters into a relationship with this man. She discovers what he is. He discovers that she knows what he is. Chabrol being Chabrol, it’s never laid out in simple terms for us, but the crux of this film is that the teacher is somehow aroused by her proximity to this man, and how the feelings he develops for her lead to his destruction. See this with a couple of friends who love to dissect movies. Very highly recommended. For more on Le Boucher, check out this essay by fellow blogger Ed Howard. 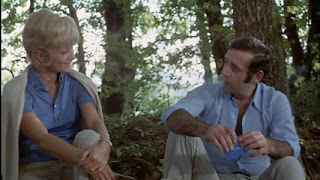 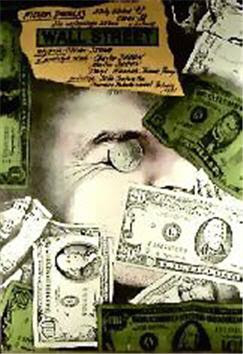 Wall Street
Posted by Jeff Duncanson at 10:47 a.m. No comments: 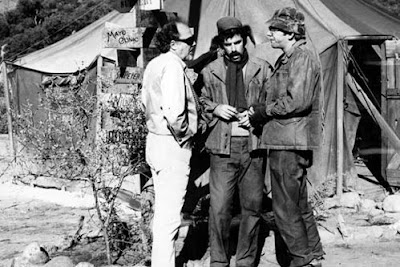 Robert Altman, Elliot Gould, and Donald Sutherland huddle up on the set of M*A*S*H.
Posted by Jeff Duncanson at 10:44 a.m. No comments: 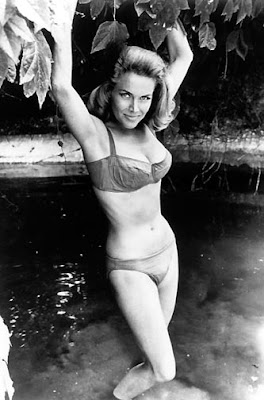 Honor Blackman
Posted by Jeff Duncanson at 5:26 p.m. No comments:

The Marquee (The Art of Eric Tan) 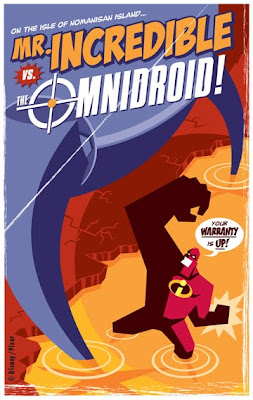 www.erictanart.blogspot.com
Posted by Jeff Duncanson at 8:46 a.m. No comments:

Up in the Air – Liked this a lot. George Clooney is good as a corporate hit man – A man who fires people for a living. I really like what they did with this character. Despite his flaws and his aversion to emotional closeness, Clooney’s Ryan Bingham draws our sympathy – He actually does want to do what’s best for the poor saps he has to terminate. This is truly a movie for its time. I have to give a shout-out for Vera Farmiga as Clooney’s love interest and alter ego. She’s terrific, and sexy in a really smart, grown-up way. 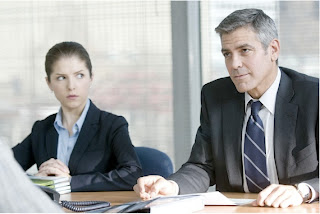 La Femme Infidele – First time seeing this one. Claude Chabrol is a great favorite of mine, and this film reminded me of why that is. Despite how his films are so often about sex and murder, there’s never an instance where he takes the easy way out. This one is about a love triangle that leads to a murder. Sex and murder, right? The thing is, there isn’t a whiff of lust in this film, and except for one brief flash, none of the rage that should accompany a murder. Chabrol draws the story out, and never cues you as to what his characters are thinking. Highly recommended. 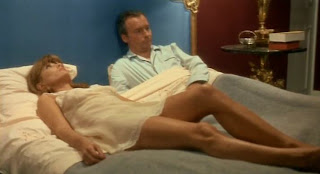 Posted by Jeff Duncanson at 8:30 p.m. No comments: 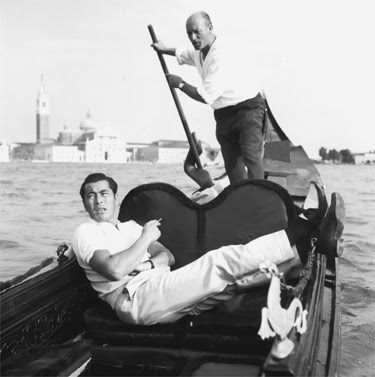 Toshiro Mifune
Posted by Jeff Duncanson at 8:54 a.m. No comments:

Compulsion – The case of Nathan Leopold and Richard Loeb is very thinly veiled and presented as a screed against capital punishment. Dean Stockwell and Bradford Dillman play the killers, and they're good, but Compulsion really belongs to E G Marshall (as prosecutor Harold Horn), and especially Orson Welles as defense attorney Jonathon Wilk, who is based on Clarence Darrow. Welles’ marvelous closing summation is the centerpiece of the film, and will eventually appear here as a “Dialogue I Love” post. Recommended.

The Hangover – I’m normally not one for dumb male comedies, but this one is just a bit smarter than the norm. Three friends try to piece together how their buddy disappeared during a drunken night out in Vegas. Among the clues they have are: A live Tiger in their room, a nude Japanese man in the trunk of their car, and Mike Tyson riffing to Phil Collins. The scene where the three are forced to participate in a tasering demonstration is alone worth the price of the rental. 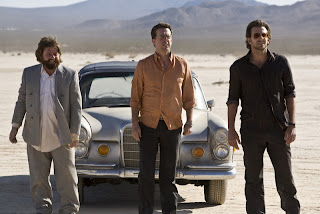 Up – Yet another winner from Disney/Pixar. I love the little winks that go into these films, like how Carl Fredrickson looks an awful lot like Spencer Tracy, or how villain Charles Muntz looks like Errol Flynn as a young man and Kirk Douglas as an old man (Hell, he even has a chin dimple!) The opening story of Fredrickson’s life with his wife is brief, but I was stunned at how beautifully poignant it is. Recommended. 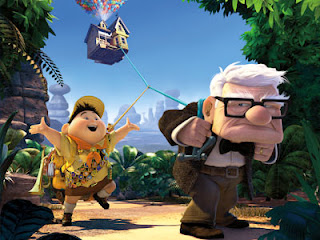