Rome has traditionally been presented in film as a beautiful, vibrant city of life. Pier Paulo Pasolini, in his 1961 debut "Accatone", takes that image and blows it to smithereens. Pasolini’s Rome is one of pimps, hookers, run-down shacks, and petty crime.

We first meet the title character as he sits at a grubby sidewalk café with his pimp buddies. A passerby derides them for their sloth, asking "Are your women on strike?" Accatone relates a story of one of their group who tried to eat a full meal and then swim across the Tiber, and died for his foolishness.

We meet Accatones’ "family", which consists of his whore Madalena , and the wife and children of a jailed friend of his. The whore has just been injured in a motorcycle accident and Accatone comes to check on her. The thing in this scene that strikes you is Accatones’ callousness and disregard for the woman – He starts out berating her for getting hit, and then remarks on her bandaged leg. He asks sarcastically "Did they think you were going to lose it?" Clearly, he thinks the bandages will be bad for business, because bad leg or not, she’s going back to the street. 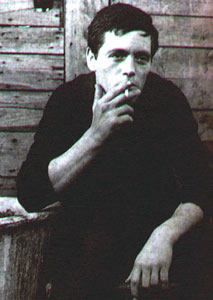 Pasolini doesn’t give us much in the way of direct information, but there are clues that let us fill in the blanks. It is assumed that the period we are looking at is not too long after the war, and it appears that Accatone has been fairly well-off, but has now fallen on hard times. Early on he stops to play with a small child in the street, and says "Don’t you recognize me? I’m your papa." We briefly meet his ex-wife, who is living with her brother and father, and it’s made pretty clear that Accatone is not wanted around them. The brother even gets into a fight with him in the street.

Time and time again we see the contradictions in the life of this pimp. He spends a lot of time lamenting the life he leads, and saying that he has no future, but the thought of work terrifies him, and he feels no remorse at cheating his friends. He meets the virginal Stella one-day, and is clearly smitten by her. He follows her around and begins a relationship with her. At first, we start to believe that Accatone may have turned a corner in his life, because he tells her that he is attracted to her innocence and helplessness. She is dirt poor and Accatone tells her that he will buy her a new pair of shoes. We wonder how he’s going to do this, since he’s just about as poor, and then we see him back talking to his son on the street , and as he gently removes his son’s gold chain, we finally see Accatone for what he truly is. 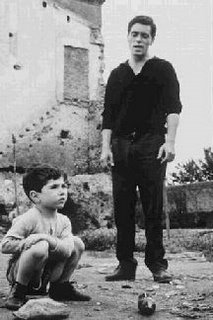 We now begin to fear his motives for the beautiful Stella, as we suspect that he has designs on her whoring for him. At a nightclub, Accatone is approached by a couple of rich men, who want to spend some time with his woman. Stella is hesitant, but he pushes her towards them. "Just dance with the man", he tells her. Afterward, of course, he browbeats her for going with them, and "making me look like a fool." Stella is rightly confused, replying "But I thought you wanted me to."

It is now clear that he isn’t going to be able to make a whore out of Stella, so he now has to try other avenues. We’ve briefly met his hard-working brother, and he is able to get Accatone a job gathering up scrap metal, but this isn’t going to work either, since it involves real work. He lasts only one day. Finally he hooks up with a friend who employs a bunch of youths to do petty larceny for him.

Pasolini has done a very unique thing in "Accatone". He has taken a character who is an unscrupulous bum, and surrounded him with like characters, and just let them go on their way. There’s no effort to romanticize him or explain him. The Accatone who meets his fate at the end of the film is consistent with the scumbag that we met at that café at the beginning. We may have hated him or pitied him, but we never wanted to turn away. 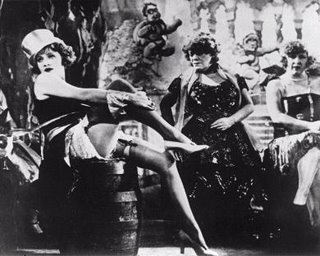 The above image is arguably the one most moviegoers would think of first when Marlene Dietrichs’ name is mentioned. Dietrich was an actress who got called an "icon" – a brand name, if you will. This movie was "The Blue Angel", and it’s really where the Dietrich legend got started. Indeed, the story in "The Blue Angel" has a couple of parallel stories – those of its stars: Dietrich and Emil Jannings

Jannings plays Professor Rath, a stogy Literature professor at a small college. We see his cleaning lady grouse about how his apartment is piled high with books and reeks of cigar smoke, and we realize that this is a man who leads a cloistered life.

One day in class, he confiscates a sexy postcard from his students, and finds out that some of them have been stealing out at night to see the girl on the postcard. That would be the nightclub singer Lola Lola (Dietrich). He finds himself in her dressing room and tries to berate her for corrupting his students, but she is breezy and carefree with him, and he is completely flummoxed. She takes off her nylons in front of him, and when she drops her panties down to him as she climbs the stairs, his goose is cooked.

Rath contrives to go back the following night, and this time decides that he has to rise to defend her honor against a drunken sailor. One criticism of this movie is that there really isn’t the feeling that she should care about this old man, but watch Lola in this scene as Rath forcibly throws the sailor out of her room. The camera goes to her, and you can see that she is touched by this gesture – That a man is defending her honor. The next thing we see is Rath waking up in her room after an apparent sexual encounter. 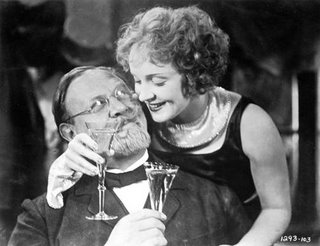 Rath’s colleagues at the college have heard about this by now, and his superior basically tells him that he can’t jeopardize his career by hanging around with a woman like that. Rath pulls himself up and says, "You are talking about my future wife." Soon the professor has quit his job, married Lola and moved in with the travelling revue with her. Rath goes through a physical transformation, as he grows slovenly and bitter in his new life. There is a terrific little montage of him testing the heat of a curling iron that indicates the passing of four years.

By this time, Rath is part of the show – He dresses like a clown and is the "appentice" of the magician Keipart. Finally the revue returns to Rath’s hometown, and he faces the prospect of going on stage in front of former colleagues and friends. To make matters worse, Lola is beginning an affair with a handsome strongman, and is doing so in plain view. So we come to the film’s climax – Rath goes onstage and is humiliated publicly – He is forced to crow like a rooster while Keipart cracks eggs on his head.

‘The Blue Angel" is notable on its’ own merits, but also because of the people involved. This was the first collaboration of Dietrich and director Josef Von Sternberg. They made seven movies together, including "The Scarlet Empress" and ""Shanghai Express". The partnership was such that it’s impossible to think of one without the other.

Then there is Emil Jannings, a textbook case of life imitating art. In many of his most famous roles, he played a man in a position of respect who is brought down. In addition to "The Blue Angel", there was his hotel doorman in Murnaus’ "The Last Laugh", and his earlier work for Von Sternberg in "The Last Command". In real life, he was an enthusiastic endorser of Hitler, and made pro-Nazi films for Goebbels. After the war, of course, he was an untouchable and he never made another film after 1945. Like Professor Rath, he made a decision and suffered the consequences.

Posted by Jeff Duncanson at 9:09 a.m. No comments: