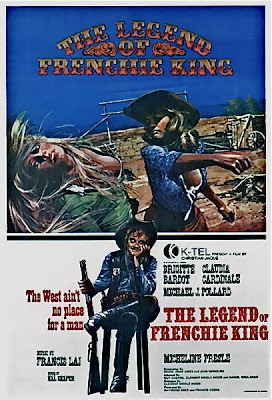 Not a great poster, but hey, Bardot and Cardinale in the same film! 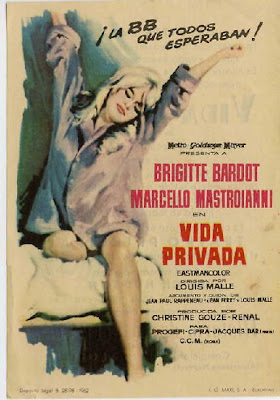 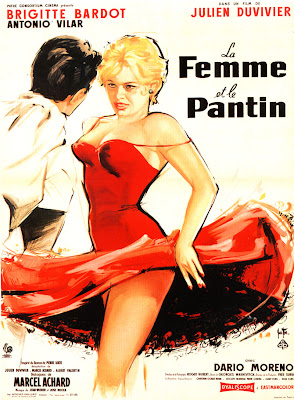 Now THIS is a great poster.
Posted by Jeff Duncanson at 9:29 p.m. No comments: 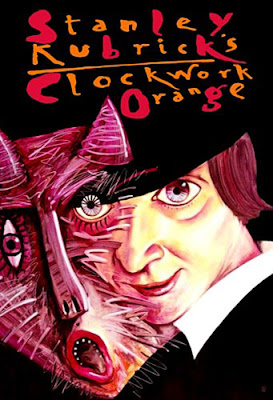 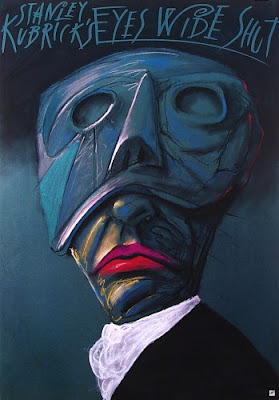 In a just world, the three central characters of Jean Renoir’s Le Bete Humaine would never have met each other. Individually they are all decent people, but together, they form an admixture of jealously, lust, adultery, madness, and finally, murder.

Lantier (Jean Gabin) is a rail engineer who has no discernable life outside of his work. He even maintains that he is married to his locomotive. The opening credits allude to dark demons inside him, but they are nowhere to be seen as the film opens. Robaud (Fernand Ledoux) is a stationmaster married to Severine (Simone Simon), who seems a bit too young and beautiful for someone like him. Nonetheless, when we first meet these people they all appear to be content. 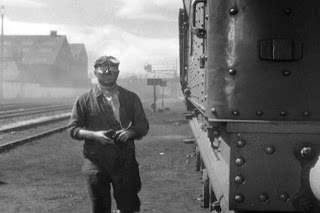 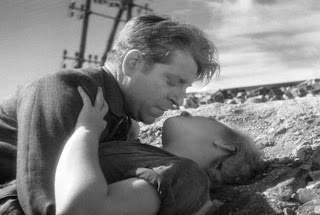 Robaud decides that the godfather has to die for his sin, and has Severine arrange a rendezvous on a train. Robaud ambushes the adulterer in his compartment and stabs him to death. What I find fascinating about this crime is the motivations for binding his wife to the murder. She is present during the murder, and besides the fact that her involvement ensures her silence, there is also the idea that by killing her lover in front of her, he is rubbing her face in her infidelity. Severine, for her part, does not react with quite the horror and revulsion that we might expect. More like quiet resignation, perhaps, like she is somehow accepting of the penance.

The murder goes smoothly, except for one detail. When the killers emerge from the cabin, there is someone there, casually having a smoke – Lantier. The moment when the two confront Lantier in the narrow corridor is filmmaking at it’s best, as Severine sees him first, then Robaud gradually comes to the realization that she is looking at something, and then it hits them that this thing just got a lot more complicated. When the murder is discovered, Lantier starts to realize that he knows who the killers are, and that they must suspect he knows. When the police question him, he inexplicably says he saw nothing. 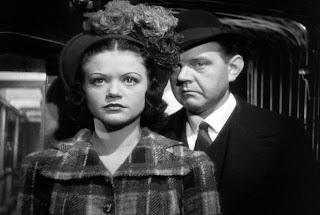 Lantier is the wild card here, and the killers are forced to make him an ally. The thing is, they can’t even begin to imagine the baggage their new partner has. As I mentioned above, the opening credits tip us off in advance about Lantier, and how he felt he was paying the price for the sins of the generations before him. It’s not immediately clear what that means, however. He seems normal enough with his railway buddies, but it’s in a meeting with an aunt early in the film that we start to see inside him. He encounters a girl who we surmise he has been involved with in the past, and as they draw close to a sexual encounter, he is suddenly overtaken by an impulse to kill her, but snaps out of it in time. In modern terms, we would say that Lantier is bipolar, and this knowledge casts new light on his loner lifestyle.

Now skip back the scene where the police interrogate him after the murder on the train. As he begins to talk, he makes eye contact with Severine, and Renoir lets the image of her face go out of focus for a second. It’s barely noticeable, but it’s a telling point of view shot that establishes a couple of things: First, that Lantier is attracted to this beautiful young woman, and second, we are seeing a possible hint of one of Lantiers murderous “black-outs.”

Severine starts a tentative friendship with Lantier, at first to ensure his complicity with the murder, but it gradually develops into some thing far more serious - a full-blown love affair. It’s during the development of this relationship that we start to see Severine more clearly. The two men have their issues, obviously, but what about her? Severine has her demons, as well. Trapped in an abusive marriage, she turns to another man who has the potential to be even worse. She seems to have a tendency towards self-destructive choices. During her time with Lantier, he shows an alarming fascination with the mechanics of the murder, but this doesn’t set off any alarms for her. 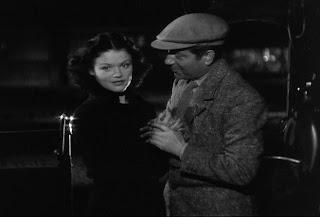 Lantier and Severine form a strange co-dependant union. She sees him as her salvation from the tyranny that she faces with her husband. He, in turn, probably believes that she can deliver him from the violent impulses in his head. It’s no surprise then, when these two damaged people decide to get rid of the one obstacle that keeps them apart – Robaud.

Lantier, however, finds himself unable to go through with it, and that tragically changes the dynamic with Severine. She looks at him differently from then on, and essentially ends the relationship. It’s only a matter of time then before Lantiers demons are released, and he commits an act from which there is go going back. He knows it, too. 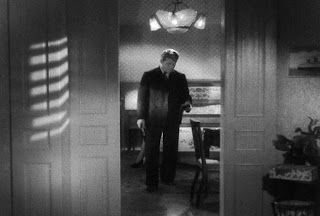 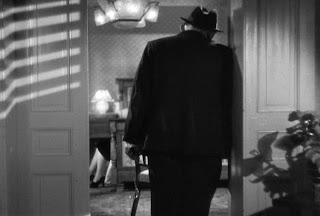 It in the aftermath of Lantiers murder of Severine that my favorite images of LBM occur, as Lantier sorrowfully walks away from the murder scene, knife in hand. This is followed immediately by a shot of the broken Robaud standing in the same spot, looking at his murdered wife, and clutching a watch taken from the murdered godfather. It’s a beautifully lyrical way to tie the three principals together, and underscore the way that all three have been destroyed by their base urges.

IMDb
Amazon
Posted by Jeff Duncanson at 11:28 a.m. No comments: 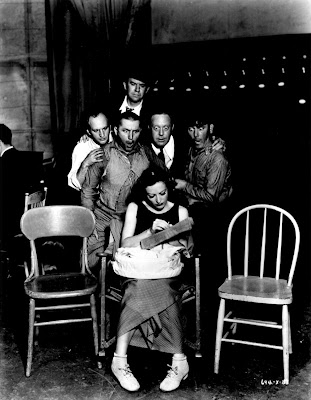 The Three Stooges (and Fred MacMurray) mug for Joan Crawford
Posted by Jeff Duncanson at 7:24 a.m. No comments: 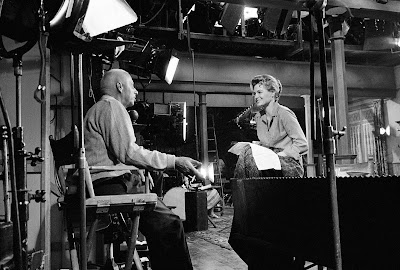 Howard Hawks and Angie Dickinson confer on the set of Rio Bravo.
Posted by Jeff Duncanson at 8:51 p.m. 2 comments:

Le Voyage Dans la Lune (A Trip to the Moon) 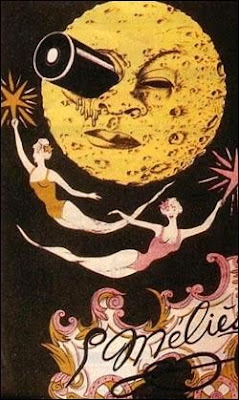 A contribution to the 1000 Films You Must See Before You Die blogathon hosted by Filmsquish.

When Georges Meiles made A Trip to the Moon in 1902, the Wright Brothers were still a year away from their first flight in Kitty Hawk. Viewed in those terms, Meiles masterpiece of interstellar adventure stands as a remarkable achievement in imagination.

The film, which clocks in at less than 15 minutes, can rightfully lay claim to being the cinema’s first science fiction work, as well as one of the first examples of a filmmaker putting a story on the screen, as opposed to simply filming an activity.

ATTTM is told without subtitles, but they really aren’t needed. The film opens with a group of scientists in a heated discussion, and a blackboard indicates the topic – How to get to the moon. The method is something you might expect them to come up with. A huge bullet-like capsule that is to be fired out of a cannon, but in looking at the craft, it is not dissimilar to that which the Apollo astronauts flew to the moon decades later. 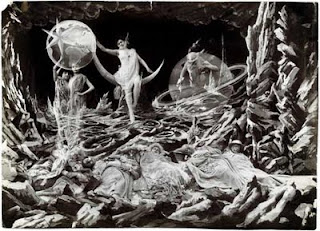 The inspiration and concept for the film came from that great font of futuristic speculation, Jules Verne. His novel From the Earth to the Moon was published in 1865, and like much of Vernes’ work is eerily prescient about out the world to come. Meiles film shares that quality – That pedal-to-the-metal feel of an imagination running rampant.

Putting aside the scientific aspects of ATTTM, it’s also fascinating to consider it as a world of cinematic art. Meiles greatest contribution to film history is that he was the first filmmaker to truly incorporate what we now call “special effects” into the language of film. Stuff like fade-outs are invisible to the eye of the modern viewer, but in this film, in this context, they are magical. 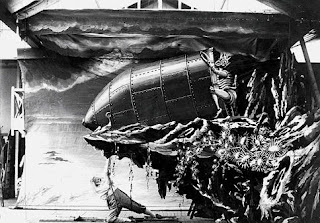 ATTTM is also surely one of the earliest examples of a director focusing on casting, costumes, and set construction. Take for instance Meiles use of female ballet dancers in this film. There’s no reason for the arc of the story for there to be shapely female characters, but I guess they suspected even then that sex sells. Or take the acrobats who play the moon men. Their inclusion gives the aliens an otherworldly vibe which must have made them completely enthralling to audiences watching at the turn of the century.

It’s not hard to watch ATTTM and see how their concept of alien life was taken and expanded upon in countless Sci-Fi films throughout the years. The malevolent creatures of the Alien and Predator movies are direct descendants of Meiles Moon-men in their skeleton costumes.