Ran and the Filmmusic Blog-a-Thon

This gorgeous sequence from Akira Kurosawa's 1985 masterpiece (scored by Toru Takemitsu) is another reminder to check out the Filmmusic blog-a-thon hoted by Damian at Windmills of my Mind. http://damianarlyn.blogspot.com/2007/01/filmmusic-blog-thon.html

Posted by Jeff Duncanson at 6:14 p.m. No comments:

My week of movie watching 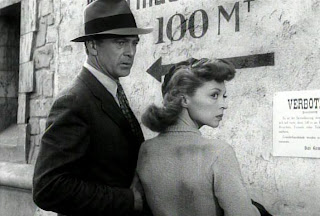 Cloak and Dagger – Fritz Lang espionage thriller from 1946, with Gary Cooper and an exquisitely beautiful Lili Palmer. This is not one of Lang’s better-regarded films, but I liked it anyway. Cooper is good as a scientist trying to thwart Nazi research into the atomic bomb, and his exchanges with freedom fighter Palmer are nicely written. It’s ending skirts a little too closely to that of Casablanca, but overall, worth a look.

The Man Who Fell to Earth – First viewing of this. I have a soft spot for the work of Nicholas Roeg – Even stuff that nobody else likes, like Insignificance. This one, though, didn’t really do it for me. It's sexy as hell, of course, but the gaping plot holes just didn’t let me relax and take it in. David Bowie is an alien who comes to earth to raise money to get water to his home planet. Hmmm …Water is pretty much free, isn’t it? How’s he getting it back there? And how does the rival corporation think they are going to get away with the murder they commit? 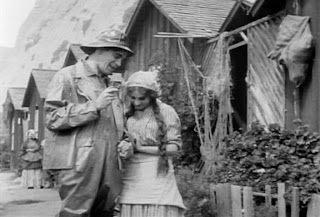 D.W. Griffith: Years of Discovery 1909-1913 – A collection of early Griffith shorts. It features a terrific commentary track by film historian Russell Merrit, and is a valuable lesson in how Griffith basically invented many of the film conventions that we take for granted now. If you’ve seen Birth of a Nation, Merritt explains how Griffith was perfecting many of the techniques that came to fruition with Birth. There’s also a stunning short named The Redman’s View, which portrays Native Americans in a sensitive, sympathetic light. This was made years before the racist Birth and it’s appalling portrayal of blacks, and makes an intriguing counter-point. 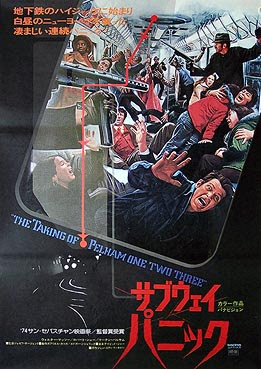 The Taking of Pelham One Two Three, Joseph Sargent, 1974
Posted by Jeff Duncanson at 8:31 p.m. No comments: 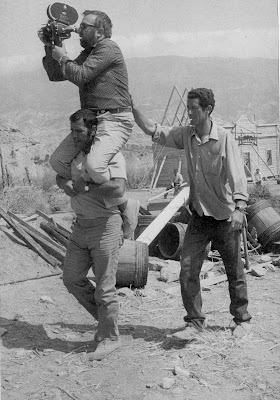 Sergio Leone gets a piggyback perspective. Once Upon a Time in the West, 1968
Posted by Jeff Duncanson at 9:26 a.m. No comments:

Posted by Jeff Duncanson at 9:38 a.m. No comments:

The Film – Singin’ in the Rain – dir. Gene Kelly and Stanley Donen

The Set-Up – I think you know the set-up.

Let the stormy clouds chase everyone from the place. 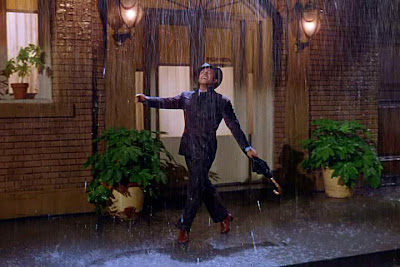 Come on with the rain, I've a smile on my face. 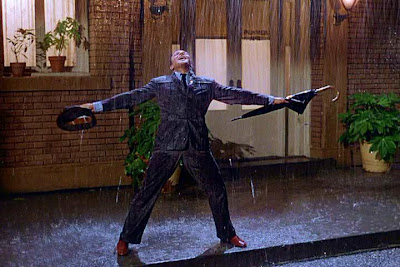 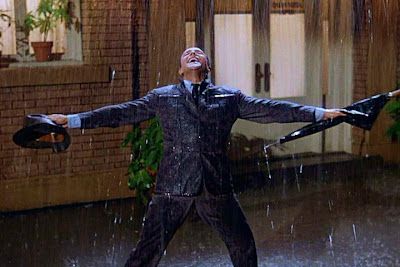 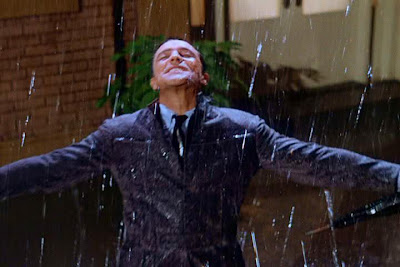 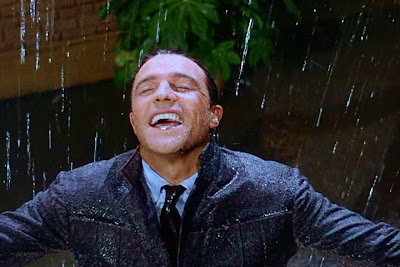 The centerpiece of Singin’ in the Rain would be among the favorite movie moments of many, many people. In my case, I distill it down to this fabulous shot where the camera pans upward and looks down on Kelly’s face. What do we see? Simple, unalloyed joy. It’s the joy of a man who is in love, but it’s also the joy of a great artist immersed in the thing he loves.

I’m always interested in watching people when they are involved in that thing that is their passion, whether it’s Arnold Palmer playing golf, or Bruce Springsteen in front of a crowd with a guitar around his neck. It doesn’t matter who or what, it’s just a nice glimpse into that person. I don’t think the movies have a better example than this.

Posted by Jeff Duncanson at 9:16 a.m. No comments:

Léolo and the Filmmusic Blog-a-thon

A wee plug for the Filmmusic Blog-a-thon being hosted by Damian at Windmills of my Mind on June 21-25. http://damianarlyn.blogspot.com/2007/01/filmmusic-blog-thon.html I'll use any damn excuse to hear Tom Waits. 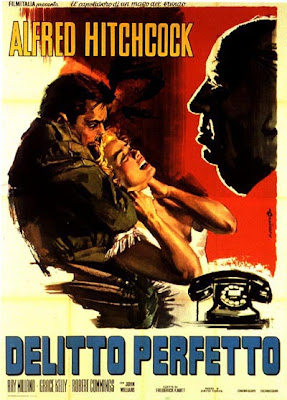 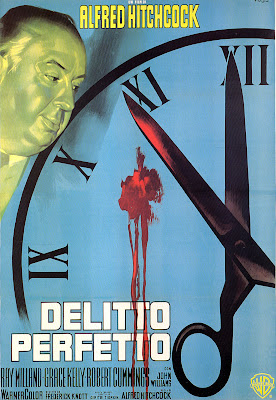 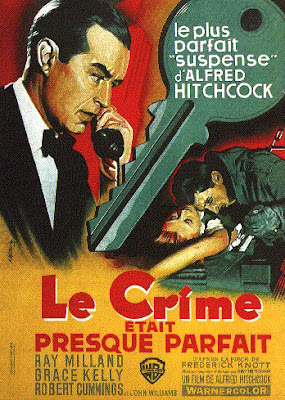 The Decline of the American Empire

The intellectuals of Deny Arcands’s The Decline of the American Empire sure like to talk, and only one topic seems to hold their interest – sex. All of them, men and women are very flippant about the topic, and consider themselves to be sexual sophisticates. The film takes its time in aborbing their hubris, then eventually lays it bare.

Decline takes place over the course of one day, and for a great part of it, its male and female characters are separated. And they talk. Their conversations are striking in the level of detail they are willing to divulge, and in the subtle one-up-man-ship of their stories. Remy and Pierre go on about their affairs with their students. Remy’s wife Dominique recalls the night that the two of them went to their first orgy. Diane talks about her sado-masochistic affair with a younger man. Claude tells of his exploits in cruising for gay men. The common thread is their seeming dismissal of the idea of sexual normalcy. 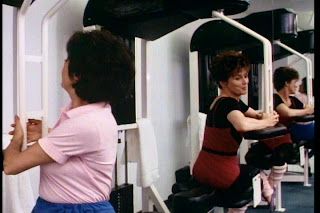 The extended opening sequences feature the men preparing dinner, and the women working out at a gym. This little role–reversal is Arcand’s sly little way of reinforcing the film’s portrayal of people who have fallen off the sexual rails. It’s startling to realize after a while how little these people really know each other. The film shows Remy talking endlessly about his affairs, and then switches to Dominique re-assuring her friends that he is essentially faithful.

I’ve made these people sound like narcissistic jerks, haven’t I? I suppose they are, but somehow, they are also likable. They are all intelligent and articulate, and clearly have a great fondness for each other. The film provides us with flashbacks that illustrate just how far some members of the group have taken the fondness. Diane’s daughter interrupts her in the middle of sex, and stays to ask questions about this strange man in bed with her mother. Pierre visits a massage parlour and finds himself being masturbated by one of his students – Who talks theory while doing the deed. These hilarious and sexy vignettes rescue Decline from being just a ponderous talkfest. 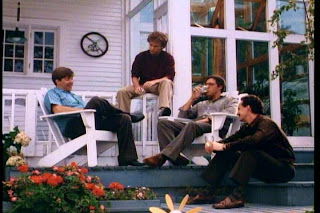 When the two groups finally unite for dinner, a curious thing happens – The sex talk all but dries up, and they fall into traditional modes of conversation and behavior. That’s when Arcand introduces a wild card into the mix – Diane’s thuggish boyfriend Mario. He interrupts their dinner, and after listening for a while, cuts to the chase.

The tension and embarrassment around the dinner table is palpable, as Mario lays out what we’ve been thinking all along. These people talk a good game, but when it comes down to it, they’re just as uptight as everyone else.

The title of the film relates to a couple of lectures that we hear at the beginning. The theory is that great civilizations decline as their peoples become more and more self-absorbed. There’s no question that these people fit that bill. The overriding theme of all of this talk is that they first and foremost are looking for gratification – the hell with everyone else. These people do a lot of hurtful things to one another - not because they are malicious, but because they just don’t think beyond themselves. By the end of the film, there’s a bit of evidence that they may realize this. Perhaps. Perhaps this new realization will vanish the next time a pretty face or a cute ass presents itself.

Note – The characters of this film re-appeared in 2003 in Arcand’s brilliant The Barbarian Invasions. The two films are interesting top watch side-by-side, just to see the evolution of these people. Check it out.

Posted by Jeff Duncanson at 1:34 p.m. No comments: 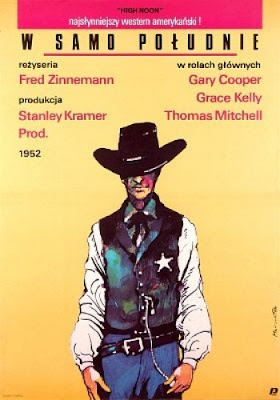 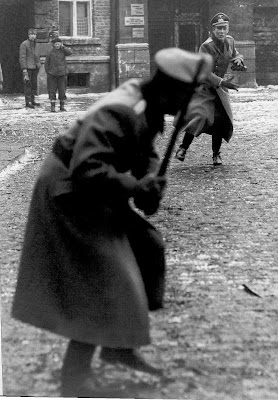 Peter O'Toole pitches some BP during a break in filming The Night of the Generals.
Posted by Jeff Duncanson at 8:55 p.m. No comments: 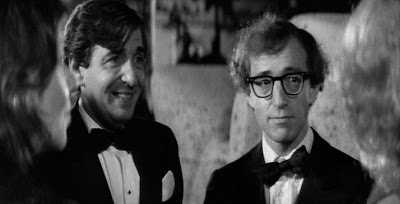 "I finally had an orgasm, and my doctor said it was the wrong kind." 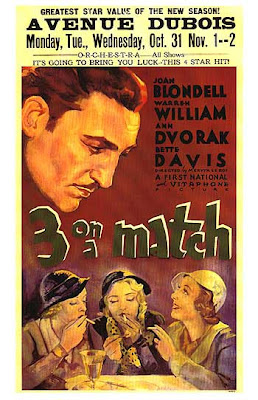