The Line-Up – Above-average police procedural from 1958 from Don Siegel. Eli Wallach is a killer/smuggler trying to recover a cache of heroin, and leaving a trail of bodies in his wake. A couple of veteran San Francisco detectives (Marshall Reed and Emile Meyer) are hot on his tail. Like most of Seigel’s work, this one is told without fluff or pretense – It’s just good, straight-ahead storytelling. The film makes terrific use of the SF locale with some great location shots, and culminates in a scintillating car chase on an unfinished highway overpass. Recommended. 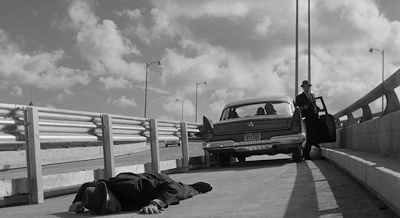 Moontide – Apart from a cool title, there’s not too much to recommend about this 1942 Noir-ish entry from director Archie Mayo (who replaced Fritz Lang at the helm). The great Jean Gabin made his Hollywood debut as a party-loving drifter who may or may not have committed a murder during a drunken binge. Ida Lupino plays a girl he rescues from a suicide attempt and falls in love with. The film has an interesting premise, but unfortunately doesn’t do much with it. The actual murderer is fairly obvious to anyone who applies Roger Ebert’s Law of Economy of Characters, and after her life is saved, the film forgets that Lupinos character was ever suicidal. Gabin is OK, and the films’ climax on a windswept breakwater is nicely shot, but overall, this one is a no. 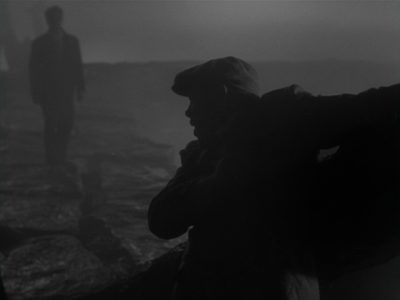 Eva – Cool and cruel 1962 drama from the great Joseph Losey. Stanley Baker plays a caddish writer who treats everyone he meets with distain, all the while carrying a shattering secret. Jeanne Moreau plays a high end prostitute who he becomes obsessed with. This one is interesting for the strange chess game between the two leads. Bakers Tyvian is engaged to a beautiful, successful woman who worships him, but is strangely drawn to the coldly sensual Eva, who treats him with distain. There is an undercurrent of self-flagellation in Tyvian's character, who is secretly a fraud. He seems to subject himself to Eva’s abuses willingly, seemingly as some sort of penance. Not an easy film to warm to, but worth the effort if you stick with it. Recommended. 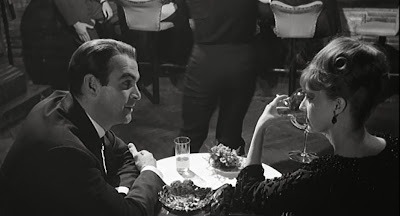 Posted by Jeff Duncanson at 9:37 p.m. No comments: