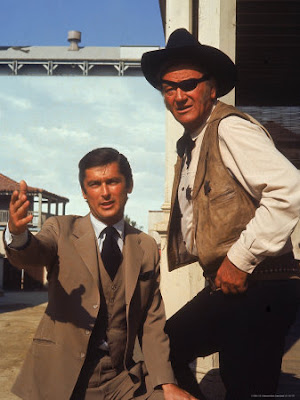 Robert Evans and John Wayne on the set of Rooster Cogburn.
Image from art.com
Posted by Jeff Duncanson at 8:08 a.m. No comments: 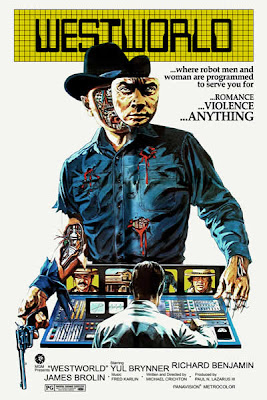 Posted by Jeff Duncanson at 5:01 p.m. No comments:

The Thief of Bagdhad – The Criterion disc. I wish I’d had a chance to see this when I was 9 or 10. It was entertaining in the grand Jason and the Argonauts style, and the special effects and especially the sets are impressive. Naturally, it has moments that are silly child-like fantasy, but that’s the audience it was make for. Conrad Veigt is terrifically slimy as the villain. Recommended. 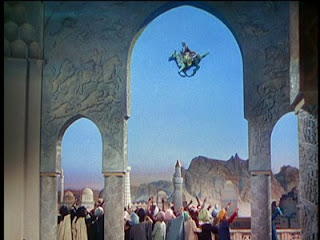 Australia – Let me run down the list. A snooty damsel out of her element? Check. A rough around the edges he-man who gradually falls in love with her? Check. An evil rancher who wants to buy up the woman’s land? Check. A small boy who, due to a tragedy, comes under the care of said woman and man? Check. A friend of the he-man who heroically gives up his life to save his friend? Check. I could go on. There literally isn’t a single solitary cliché that this film doesn’t employ, thus it was a real slog for me. The only saving grace was the cinematography, which is spectacular. Not recommended. 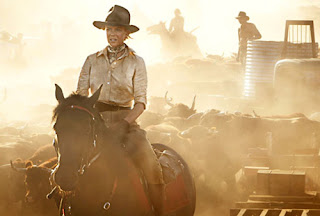 Beverly Hills Chihuahua – Jamie Lee Curtis, Drew Barrymore, Andy Garcia….What were you thinking? This was a one-note joke that got old really, really quickly. Still, I think I liked it better than Australia. 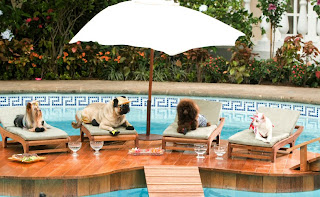 Posted by Jeff Duncanson at 8:59 a.m. No comments: 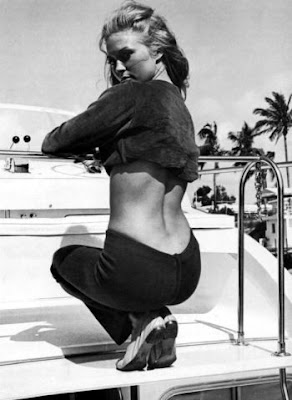 Faye Dunaway
Posted by Jeff Duncanson at 10:31 a.m. No comments: 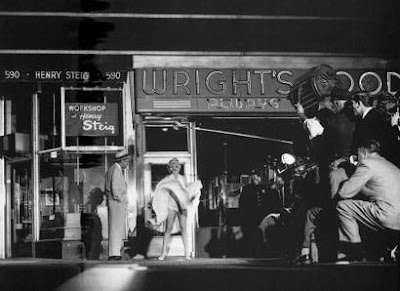 The Seven Year Itch - The making of an iconic image.
Posted by Jeff Duncanson at 9:09 a.m. No comments: 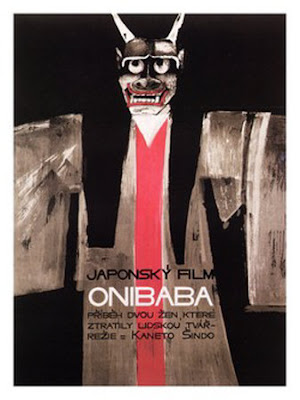 Posted by Jeff Duncanson at 8:52 p.m. No comments:

Tell No One – Rent this film. I have a soft spot for twisty thrillers, and this French number from 2006 is one of the best I’ve ever seen. The premise – a doctor’s wife was murdered 8 years ago, but one day he gets an e-mail from her. As I watched this one, I thought, “There’s no way they can resolve all this!”…Luckily for me, I was wrong. Terrific supporting performances are everywhere in this one, and none of them feel superfluous. Hell, even the dog matters to the plot! This was really a treat. Rent it. 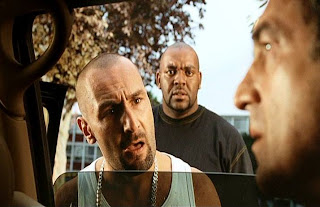 Deliverance – This is, I think, the third time for this one, and I like it more every time. I love the way the roles of the main characters evolve. Burt Reynolds’ alpha-male Lewis ends the film whimpering in a canoe, and Ned “squeal like a pig” Beatty goes from being a city slicker stereotype to a semi-plausible macho man. I once again watched to see if the films’ ambiguities are indeed ambiguous. Is Drew shot or does he jump to his death? (He almost certainly jumps) Does Jon Voights' Ed kill the right hillbilly? (Still not 100% sure.) 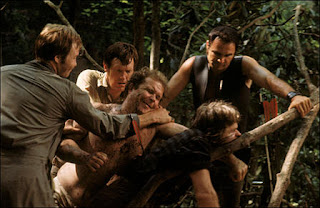 Osaka Elegy and Women of the Night – It’s great to see a couple of previously hard-to-see Mizoguchi titles get a proper release by Criterion. Elegy, from 1936, is the heartbreaking story of a woman who allows herself to be used by a wealthy man in order to save her family from financial ruin, only to have them turn on her because of it. 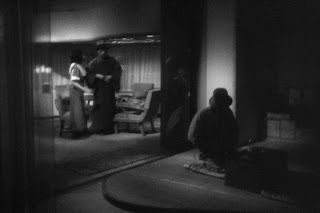 The searing Women (1948) tells the story of a trio of women and their attempts to resist the pull of prostitution in post-war Osaka. The two films mine similar ground – The plight of women in Japanese culture, and the indifference of powerful Japanese men to it. Both highly recommended. 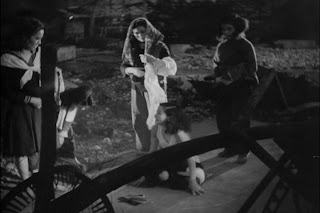 Ocean’s Eleven – Da original – Hadn’t seen it. It was pretty entertaining, and it goes without saying that there’s cool everywhere you look. The dialogue has a terrific jivey rhythm. Such as:

“Think of her rich.”

Akim Tamiroff’s in there, too. You have to love an actor who has worked under Preston Sturges, Orson Welles, and Jean-Luc Godard. One small quibble – It’s never a bad idea to have Angie Dickinson in your movie, but she is utterly wasted here.

Posted by Jeff Duncanson at 8:26 a.m. No comments:

The very title of Akira Kurosawas’ 1963 masterpiece begins to tell the story. High and Low is about extremes – Rich and poor, good and evil, Heaven and hell. It’s about a man who has everything, but faces a decision that would leave him with nothing.

The man in question is Kingo Gondo, played, as many of Kurosawa’s heroes were, by the great Toshiro Mifune. Gondo is a wealthy executive for a successful shoe company and lives his wife and young son in a beautiful, modern home on the top of a hill. The first shot in the film starts to point out the extremes – a view from Gondo’s living room of the bustling, sooty city below. Gondo’s house almost deserves a credit in this film; it’s so central to the story.

The film opens with Gondo in an informal conference with some other the other big shots from National Shoe. They want to put a flashy but cheaply made shoe onto the market but Gondo vetoes this. He states “I won’t put our name on junk.” Gondo is a man who has gotten to the top of the ladder through sheer willpower, but he’s also a man with strong morals, as the meeting demonstrates.

The executives have another bombshell to drop on him – They are planning a takeover, and they need his voting shares to achieve it. Gondo is hesitant, and grows angry when he is told that if he doesn’t go along, he could end up out on his ear. We find out after the executives have left that Gondo has his own takeover plan, having secretly bought up enough shares to gain control. He is about to finalize the deal that very night. This little bit of background on Gondo is vital, because it pre-establishes him in our minds as a guy who will do the right thing.

He gets his chance when he gets a call from someone who claims to have kidnapped his son and demands a huge ransom for his return. We’ve seen the son already, playing cowboys and Indians with a friend, and there was a little moment that the mother mixes the two boys up. It was innocent in this setting, but it becomes huge with the realization that the kidnapper didn’t get Gondo’s son, but rather the son of his chauffer.

It’s in these following passages, as Gondo realizes that he is still expected to pay the ransom that High and Low really elevates itself. Gondo, you see, is a principled man, but he is also proud and stubborn. It has taken him years to work himself into the position he now holds. If he were to pay the ransom – For a child that isn’t his – He would lose everything. If he doesn’t pay, he will be vilified for letting a child die.

Watch the way Kurosawa uses the apartment layout and the widescreen format during these scenes. The apartment is wide, but it’s also deep, and the director places the actors in this space in such a way as to amplify the tension that is developing. Note the poor little chauffer, looking forlorn and holding his son’s cap in his hands. Kurosawa places him in the rear and to the side to call attention to his sorrow, but also to his lower social standing. As the decision begins to weigh down on him, Gondo is shot sitting alone, back to the rest of the people in the composition. The decision is his alone. It’s a masterful use of the space, and it’s done so smoothly that it really doesn’t call attention to itself.

High and Low is a long film – It runs close to 2 ½ hours, and it’s unusual in that after the drama of the abduction and payout, Kingo Gondo basically disappears from the next chunk of the film, when the police take over in the search for the kidnapper. H & L is really two films, and the two are very different in tone. It’s to Kurosawa’s great credit that the two disparate halves make such a fabulous whole.

The thing that strikes me in watching the police procedural section is the way that the collaborative nature of the work is celebrated. The concept of a group working as one is a common motif in Kurosawa’s work – Think of the group of young samurai in Sanjuro, or the reporters at the beginning of The Bad Sleep Well. – But it is greatly expanded on here. One of the more memorable scenes is a large meeting of all of the cops on the case. There are probably two dozen cops in the room, and as the lead inspector runs down the details, the cops get up in pairs and present their findings. It’s a wonderful way of evoking the scale of the teamwork involved.

As this section of the film progresses, we get to meet the kidnapper. He’s a young medical student who lives in the slums and has a good view of Gondo’s house on the hill. The kidnapping drama unfolded in Gondo’s house (heaven), and now the action switches to the grimy city below (hell). The young man is seen perusing a newspaper at one point and sees a story of how Gondo has become a hero for his actions in saving the boy. The film doesn’t really comment on this, but it leaves the impression that for the kidnapper, bringing Gondo down from his lofty perch was part of the plan.

As the police close in on the kidnapper, the film descends deeper and deeper into the underworld. This culminates in an astonishing extended sequence in a heroin den. This is truly “hell”, inhabited by wraith-like addicts. It’s a marvelous, harrowing visual, unlike anything else Kurosawa ever presented onscreen.

Gondo returns to the film at it’s close, after the kidnapper has been captured. When we see him again, auditors are appraising the contents of his house. Considering all that he will lose, he seems okay with the proceedings. He said earlier that if he lost his fortune, it wouldn’t end his world, and that sentiment is evident here, as well. The final moments of H & L are what really make Kingo Gondo one of my favorite movie characters. When he finally sees the kidnapper face to face, he is filled not with anger, but with regret. He says to the young man “Why should you and I hate each other?” The scene is filmed in a prison interview room, and as each man speaks, the reflection of the other is imposed upon his face, as to suggest the way the two are tied to another.

Kurosawa is, of course, best known for his samurai epics, like Rashoman, Throne of Blood, and The Seven Samurai and rightfully so – They’re great films. My own tastes, however, seem to drift toward his “modern” tales of which this is Exhibit A. It’s based on a novel by American crime writer Ed McBain, but Kurosawa and Mifune have taken it and made it positively, undisputedly their own.

Posted by Jeff Duncanson at 1:03 p.m. No comments: 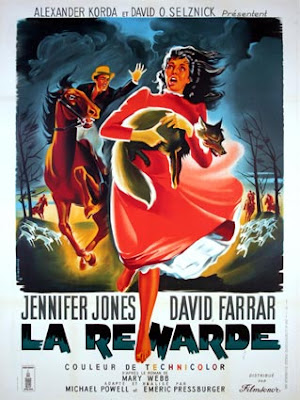 aka Gone to Earth
Posted by Jeff Duncanson at 10:26 p.m. No comments:

Ursula Andress
Posted by Jeff Duncanson at 4:16 p.m. No comments: 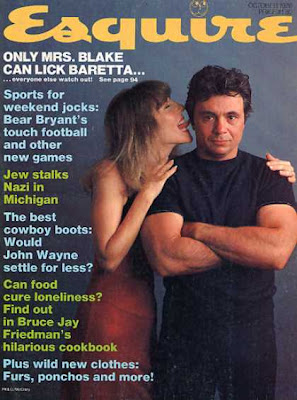 "Sometimes nothin' can be a real cool hand."
Posted by Jeff Duncanson at 10:25 a.m. No comments: