The opening images of Kineto Shindo’s 1964 masterpiece “Onibaba” are soothing – A plain covered with long grass swept by wind. This is captured in gorgeous black and white photography, but it’s misleading. This isn’t a soothing story by a long ways. It’s a story that’s shot through with blood and sex.

The film centers on two women – an older one and her young daughter-in-law – and their needs are absolutely primal. They begin every day with the task of surviving, and they have developed a grisly commerce. They ambush and murder wandering samurai, and steal their weapons and armour to exchange for food. Indeed, the films’ opening images illustrate their handiwork, as two ronin are killed, stripped, and dropped into a deep pit. 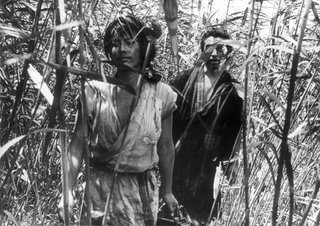 The two woman soon encounter the vagabond soldier Hachi, a friend of the old woman’s son Ushi. He has returned from fighting in the wars that are raging throughout the countryside, and he tells tales of how he narrowly escaped death and how Ushi wasn’t so lucky. Hachi is loud and exaggerated, and gives the impression of being one not to be trusted. The women certainly don’t, as they treat him with distain. They want to know about the death of Ushi, and if Hachi could have prevented it. The old woman later tells the daughter-in-law exactly what’s on her mind.

“He may have killed Ushi himself.”

It’s a second encounter with Hachi, however, that first lets us in on where the story is headed. The younger woman is sitting by a lake, pounding some laundry with a stick, when Hachi appears. He talks to the girl, and it’s obvious from watching his eyes that he desires her, as she sits barelegged and spread-eagled on the dock. The older one sizes him up immediately, and warns her. “He wants you.” Thus begins the bizarre triangle – the lecherous Hachi pursues the younger woman, and the older one desperately tries to keep him away.

Ah, but it’s not quite that simple. The younger woman succumbs to her needs and begins to visit Hachi in his hut at night. The older one follows her and watches as they have sex. She runs away from the scene and then stops and grasps her breasts then wraps herself around an old dead tree. The camera pans up the tree, and the sexual symbolism is unmistakable. Her primal urge to maintain her way of life is being challenged by another – her desire for sex.

The following day she goes to visit Hachi and finds him sleeping in the grass. The contradictions in the old woman are brought right to the surface in this brilliant sequence. She derides him as a useless bum as he sleeps, then wakes him and tries to induce him into sex. Shindo shoots Hachi lying on the grass, with only her bare leg visible, and then shoots her from below stepping over and straddling him. This subtle suggestion of sexual tension is masterfully done.

The tale takes a bizarre twist with the introduction of another character – A mysterious samurai who wears a hideous demon mask. The samurai asks the old woman to show him how to get to the main road. As the two wind their way through the long grass, the stranger tells why he wears the mask – to protect his face in battle, because he is extraordinarily handsome.

The old woman leads him directly into the pit, and he falls to his death. She climbs down into the hole to retrieve his valuables, and predictably succumbs to curiosity about this handsome face. She pulls the mask off with some difficulty, and in doing so seals her fate.

The following evening the young woman sets out through the grass for her rendezvous with Hachi, and in a hugely frightening scene, comes face to face with the demon. It’s not hard to figure out what’s going on here – The old woman is using the mask to frighten the younger one away from Hachi, but this takes a tragic twist on a rainy night. The young woman again sees the demon, and runs back home. She slowly gets a fire going in her hut, and the emerging light illuminates a huddled figure on the floor, back turned. The figure slowly turns and is revealed as the demon again. The masked figure starts to plead – “It’s me!!!!” “I can’t get it off!!” 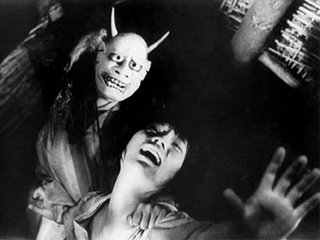 It is revealed to the young woman that the old one has been scaring her, and that the mask had gotten attached to her face – Just as it did the samurai. The old woman pleads to have it taken off and in a chilling scene, the young woman tries to break the mask with a hammer as the old woman screams and cries.

The conclusion of “Onibaba” does not leave you with a neat resolution. Hachi meets his end at the hands of the last person in the world he expected to see, but for the women, it’s a bit unclear. Let’s just say the pit figures into things again.

What a frightening and imaginative thriller this film is! It was done on a budget of next to nothing, but creates images that are impossible to shake. There are no special effects, and no cheap scares. “Onibaba” creates its atmosphere through lighting, location, music, and character…and that brilliant demon mask.

I have a notion to try and introduce a new film genre. This genre exists somewhere amongst film noir, the family drama, and the horror film – of the 40’s and 50’s. The films have the veneer of happy, well-adjusted family life, but there are terrible forces lurking underneath. You can go back to stuff like the old Ronald Reagan film “King’s Row”, and through movies like “Night of the Hunter”, “Hush, Hush, Sweet Charlotte”, and “Blue Velvet” right up to “A History of Violence” today. I’m going to call them “Norman Rockwell Gothic”.

That brings me to “The Red House”, a lesser known little marvel from 1947, directed by Delmer Daves. It is set in an idyllic little farming community, where the schoolkids wear letter sweaters and use the word “gosh”, and where farmers wear a suit to the dinner table. It’s the kind of portrait Rockwell would have come up with, but buried under its surface are lust, madness, and murder.

Farmer Pete Morgan (Edward G Robinson) lives on a quaint little farm with his sister, and his adopted daughter Meg. The Morgans are a nice bunch, but their isolation means that the townspeople talk and gossip about them, as their young hired hand Nate tells them his first day on the job. Nate says the rumour is that Meg’s parents ran off, but Morgan gently tells him that isn’t true - that they were killed in a car accident. 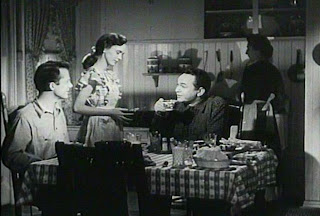 This first visit by Nate also provides the first indication that there’s something not right around the Morgan place. After dinner, Nate starts out for home and casually mentions that he’s going to take a short cut through the Ox-Head Woods. Morgan tries to dissaude him, gently at first – but then more forcefully and finally in a panic.“Nothing will prepare you for the screams that you will hear for the rest of your life!”

“From the Red House!”

Nate won’t be talked out of it, and sets out at night with a gale force wind blowing. Once in the woods, of course, he hears or thinks he hears the screams, and the film brilliantly evokes a sense of disorientation and panic. The shaken teen ends up back at the Morgan place for the night.

Nate is not the type to scare easily, and the experience in the woods makes him really curious about the red house, and what is spooking Pete so much. A second trip into the woods results in being knocked unconscious after getting attacked by an unseen assailant.

Soon afterward, there is a meeting in the forest between Morgan, and Teller, a shadowy hunter that we have met briefly at the start of the film. It is revealed that Teller has been given hunting rights in the woods, in exchange for “Keeping trespassers out”. The attack on Nate is thus explained, but this also amps up our curiosity about the red house, especially when Morgan tells the hunter, “I don’t want to see anyone hurt, but if a bullet were to just miss someone….”

Meg has by now begun to act upon her own curiosity about the red house, and whilst on a walk by herself, actually finds it. There is no masking the fact that Meg has some connection to the house, as Theremin music wells up on the soundtrack, and her attention is drawn to the farm’s icehouse. She relates this experience to Nate. “ I don’t know how I know it was the ice-house, but I just do." 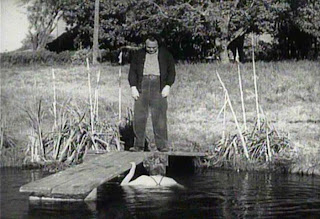 Morgan begins to lose his grip on reality as the two teens get closer to the secret of the red house. In visiting Meg in her room, he makes a telling slip, calling her “Jeannie.” This goes uncommented upon, but in a later exchange at the swimming hole, Morgan appears to suffer a breakdown, as he addresses Meg as Jeannie again. This time it’s clearly not just a slip – He actually is speaking to Jeannie, and Meg has now figured it out.

Meg ventures back to the red house, this time going inside, and she now understands that it was her home once upon a time. Morgan follows her there.

“Who is Jeannie, Pete? Is it short for Genevieve? My mother?”

Finally, Morgan spills his terrible story – About a woman who he loved and how he came to kill her and her husband, and how he disposed of their bodies in an icehouse.

Robinson is simply marvelous in this role, as he was in most of his roles. He watches with mounting unease as his past comes back to destroy him, and in his final act, sits stonefaced as the water in the icehouse comes up and over him. There’s a tiny, but perfect little coda, as well. As Morgan truck goes under the water, a lone surrey wheel floats to the surface – A reminder of a long-ago crime finally uncovered.

Footnote: A couple of points. I mentioned the use of the Theremin on this soundtrack. It might seem a strange choice, but the way it creates unease and tension is invaluable.

Also, as great as this film is, it has a lot of padding. There is a silly subplot about Nate’s mother which should have been taken right out, and there’s another about Nates girlfriend Tibby and Teller, which is notable only for the presence of a white-hot young Julie London