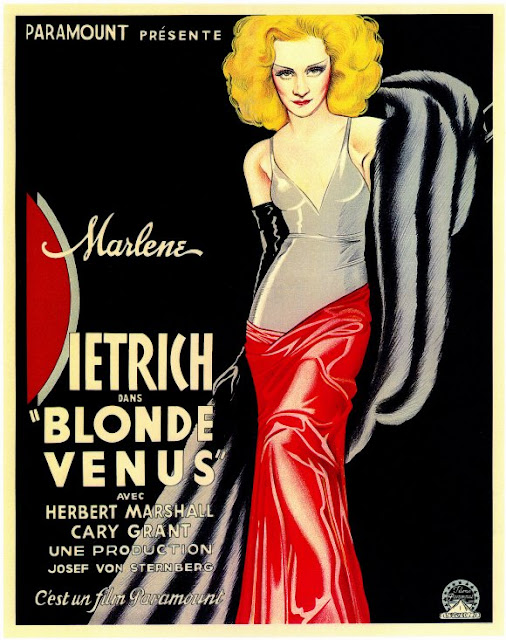 Posted by Jeff Duncanson at 6:38 a.m. No comments: 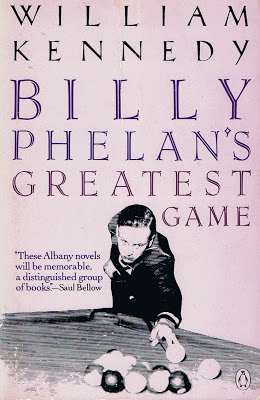 There has to be something mad and wonderful in store in any novel that begins with a guy getting bowled to death. That’s how William Kennedy kicks off Billy Phalens Greatest Game, and this study of Depession-era nightlife is a joy for anyone who loves to inhale sharp dialogue and great characters.


Kennedy’s evocation of 1938 Albany is of a city of cards and pool, fast women, and smoky, pissy-smelling bars. That’s Billy Phalens world, and it’s one he occupies comfortably. When the son of one of the members of Albany’s powerful McCall family gets kidnapped, however, the screws tighten up. Billy gets approached by the the McCalls as a potential mediator/snitch, and the novel follows him over the course of a couple of weeks while the drama plays out. Despite the seedy crowd he hangs with, Billy has a personal code – You pay your bets, you don’t cheat, and you don’t fink.


Hanging around the edges of the story is Billy’s father Francis, a onetime star baseball player who has dropped out of society due to a couple of tragic events in his past. Francis Phalen (The central character of Kennedy’s Ironweed) is only a peripheral character in Greatest Game, but his story, packed full of melancholy and numbing pain is a touchstone for many of Kennedy’s Albany novels.


It’s not an easy task to pick out an excerpt from a Kennedy novel, but I chose this rambling travelogue of Albany nightlife, written by a man who knows these streets well.


Now 1913 was gone, too, but Billy was gliding down Broadway in a craft of his own making, and he relished the sight. There was Albany’s river of bright white lights, the lights on in the famous Lunch, still en, and the dark, smoky reds of Brockley’s and Becker’s neon tubes, and the tubes also shaping the point over the door of the American hotel, and the window of Louis’s pool room lit up, where someone 3as still getting some action, and the light on in the Waldorf restaurant, where the pimps worked out of and where you could get a baked apple right now if you needed one, and the lights of the Cadillac cafeteria with the pretty great custard pie, and the lights on in the upper rooms of the Cadillac hotel, where the Greek card game was going on and where Broadway Frances was probably turning a customer upside down and inside out, pretty , tough, busy, knobby lady and Billy’s old friend, and  the lights in the stairways to the Monte Carlo, where the action would go on until everybody ran out of money or steam, and the lights, too, in Chief Humphrey’s private detective office, the chief working late on somebody’s busted marriage, and the light in the back of red’s barbershop coming through a crack in the door, and Billy knew that red and others were in there playing blackjack. And look there, too, buddy boy: The lights are on in Bill’s Magic shop, where Bill is staying late, hoping to sell a deck of cards or a pair of dice or a punch board or a magic wand to some nighthawk in search or transport, and the lights are on, too, in Bradt’s drug store, where Billy does all his cundrum business.
Amazon
Posted by Jeff Duncanson at 8:21 p.m. No comments: 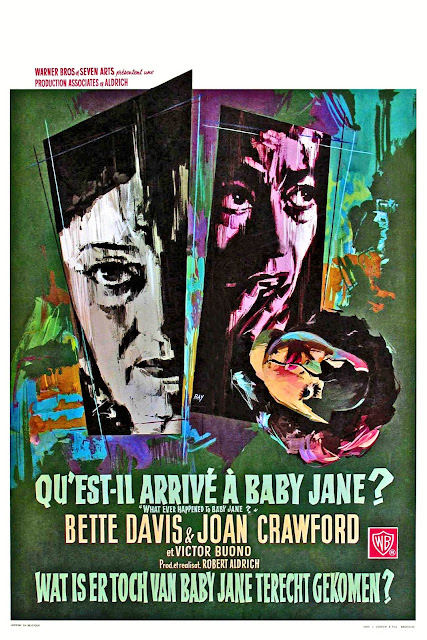 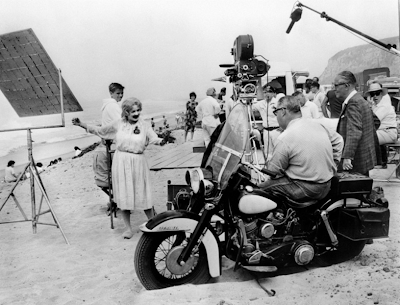 Robert Aldrich (on motorcycle) directs Bette Davis on the set of What Ever Happened to Baby Jane?
Posted by Jeff Duncanson at 7:37 p.m. No comments: 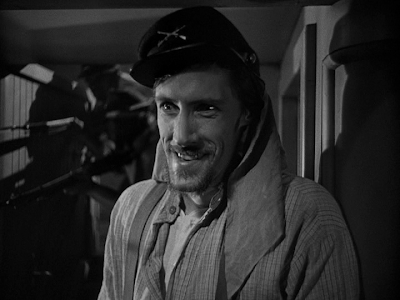 The name Carradine is known to anyone who has even a passing knowledge of modern film. Brothers David and Keith turn up time and again in the films of the 70’s and 80’s. A lot of people don’t know the work of the head of the acting Carradine clan, however. That would be John Carradine, character actor supreme. Carradines’ lanky body and big baritone voice made him a natural for playing heavies and puffed-up blowsy types, and that was his bread and butter for his whole career.


John Carradine is first and foremost associated with the films of John Ford, and his work includes the very finest in supporting acting. He’s best known as reverend Casy in The Grapes of Wrath and as the aristocratic Hatfield in Stagecoach. Those two roles alone would qualify one as an all-time great, but check out more of his Ford resume: Drums Along the Mohawk, The Prisoner of Shark Island, Cheyenne Autumn, and my favorite, The Man Who Shot Liberty Valance. Besides Ford, he also did stuff like The Ten Commandments for Cecil B DeMille, Johnny Guitar for Nicholas Ray, and Man Hunt for Fritz Lang. He’s played everything from a Nazi to Abraham Lincoln. It’s really an interesting filmography to look at – you can see all the great stuff I’ve already listed, and you can also see Sex Kittens go to ollege and Billy the Kid vs. Dracula (as Dracula, natch). His television credits are as big as his film credits, and includes series like Gunsmoke, Have Gun, Will Travel, 77 Sunset Strip, Bat Masterson, and Wanted: Dead or Alive.
Posted by Jeff Duncanson at 9:51 p.m. No comments: