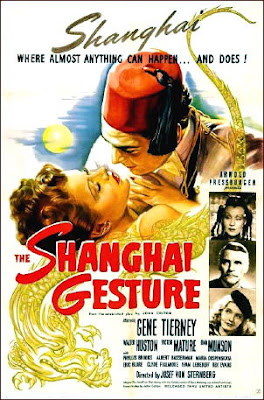 This great poster was shamelessly ripped off from Mike's Movie Projector. You gotta check this site out.

The Paradine Case – I’m starting to work my way through some of the lesser Hitchcock films that I still hadn’t seen. This one has its admirers, and there’s some stuff to like here, particularly another of Charles Laughton’s great droll supporting performances, and some amazing production design (This film has the greatest courtroom set I’ve seen). The big drawback for me was Aida Valli’s performance as the accused Mrs. Paradine. Gregory Peck’s defence attorney is supposed to fall in love with her, but honestly, there’s no reason why he would – She is so frosty that it damages the film. 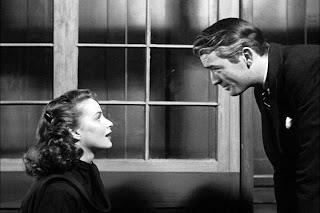 Three Days of the Condor – Sydney Pollacks 1975 thriller about a CIA operative (Robert Redford) who steps out for lunch one day, and narrowly avoids being murdered along with the rest of his colleagues. I liked the sense of paranoia that this film produces, and I loved Max Von Sydow as an icy killer-for-hire, but I had trouble believing Faye Dunaways’ character would fall so quickly into bed with what could only logically be like a nut-job kidnapper – Even if he did look like Robert Redford. Recommended, though.

The Perfect Storm – The true story of the loss of the fishing boat Andrea Gail in a massive storm is one of the most relentless action movies I’ve seen. The film takes a little time to establish a bit about the characters, and then drops the hammer on them. The film is almost solid action for at least the last hour, and it struck me that filming it must have been a huge physical ordeal for the actors. They get whipped by wind, thrown around a lurching deck, and plunged under water. It’s a terrifically well done film, as it captures the frenzy of men trying to save themselves, when realistically, they have no chance. Made by Wolfgang Petersen, who also directed the great Das Boot. Check it out, too. 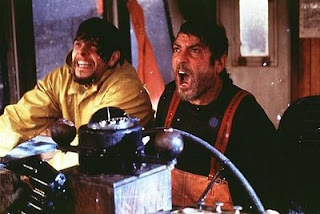 The Proposal – I kept thinking that maybe, just maybe, this film wouldn’t go down the path it seemed to be. Corporate toady Ryan Reynolds is forced to marry his uber-bitch boss (Sandra Bullock) so she won’t get deported and he will get his big promotion. Then he takes her home to meet his family, and she melts and becomes human. I hoped the film would give her a Noir-ish ending, where she would agree to get deported, and he would get to go back to Alaska and marry his childhood sweetheart. But no, it threw together a smarmy ending that made me want to gouge my eyes out with a fork. 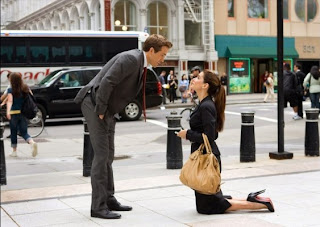 Posted by Jeff Duncanson at 9:57 p.m. No comments:

The Man Who Shot Liberty Valance

The Golden Age of the movie Western featured heroes who were pure of heart and straight as an arrow. Then, in the 1960’s, Westerns took a turn that reflected the one that society was undergoing. The movies started to question the concepts of morality and heroism, and more often portrayed a world where the lines were blurred.

If there is one film that could be said to stand at the crossroads between these two eras, It could very well be John Ford’s The Man Who Shot Liberty Valance, from 1962. It revolves around two men, who could each be considered an exemplar of one of the eras mentioned above. Tom Doniphon (John Wayne) is the classic Western hero: Tough, no nonsense and with a hard sense of justice. Ransom Stoddard (James Stewart) is a “new” Western hero. He’s an idealistic young lawyer and a pacifist.

Stoddard’s introduction to the town of Shinbone is a harsh one, and it serves as a wake-up call that his ideals are going to be tested in this new place. The vicious outlaw Liberty Valance (Lee Marvin) holds up the stagecoach he is riding on, and gives him a savage beating. Valance is essentially a fleshed-out schoolyard bully, taking exception to Stoddards bag of law books and cultured mien.

The relationship between Stoddard and Doniphon is illustrated by their interaction with two other people. One is Valance, and the other is Hallie, a young woman who nurses Stoddard back to health when Doniphon brings him in after Valances' assault. 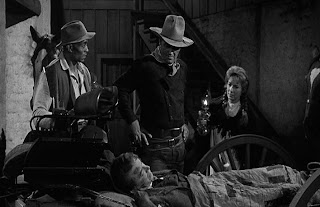 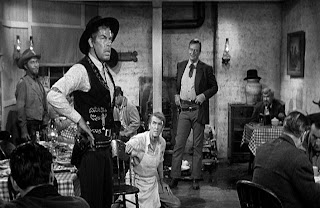 Valance is a fearsome character to the people of Shinbone. When he walks into the saloon, everything stops, and he takes what he wants with impunity. The one person who isn’t intimidated is Doniphon, and the film indicates that Valance is somewhat taken aback by Doniphon’s courage. Doniphon is openly dismissive of Stoddard’s plan to go after Valance via legal means, claiming it will just get him killed. At this juncture, it’s hard to disagree. 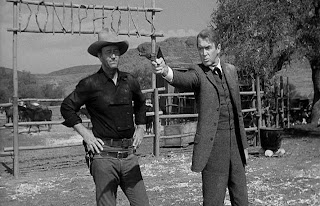 The other main character in this is Hallie (Vera Miles), who Doniphon loves and plans to marry. It’s fairly plain that she feels the same way about him, but as a rough and tough alpha male, he finds it a bit hard to be sweet with her. Things start to change when the sensitive and educated Stoddard moves in. There’s an important scene where Stoddard discovers that she can’t read or write, and cuts right through her humiliation to assure her that she can learn how in no time. I think this is the seed of the relationship between the two, as she begins to see that this new man might represent a whole new life for her.

Liberty Valance is above all about the changing of the guard in America – About how the resilient pioneering types (as personified by Doniphon) slowly gave way to a new, idealistic man with an eye to the future (Stoddard). The real joy in this film is in seeing this realization dawn on Doniphon. He may think Stoddard is naïve and foolish, but he respects him for his courage. That’s why he tries to teach Stoddard how to shoot. He knows that men like Stoddard will be important, as the West becomes a civilized society.

There’s a political undercurrent running parallel to the human story here, as well – The quest for statehood. It’s established that the large cattle barons call the shots, and that they enforce things their own way. (Valance works for them). Statehood would mean laws, education, and railroads – All the bells and whistles of modern society. This is another illustration of the films sense of inevitability. The times, they are a changing and the townspeople realize that Ransom Stoddard is someone that they want at the forefront. 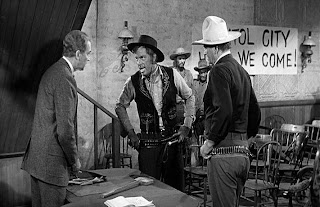 The moment that the film builds toward, of course, is the final showdown between Stoddard and Valance. The tenderfoot lawyer has to strap on a gun and go out to face the outlaw. The films' title dispels any intrigue about the outcome of the gunfight, but after it’s over, it doubles back to reveal that Stoddard is NOT the man who shot Liberty Valance, after all. This revelation and the consequences of it have been discussed ever since the film first appeared. Stoddard, known for his pacifist views, is assisted in his burgeoning political career by his assumed killing of a hated outlaw. Doniphon, who knows the act will cost him the woman he loves, comes to Stoddard’s rescue in the shootout. The scene where Doniphon reveals the truth to Stoddard is exquisite in its sadness. He tells him “Hallie’s your girl now. You taught her to read and write, now give her something to read and write about.” I don’t think John Wayne was ever better than right there. 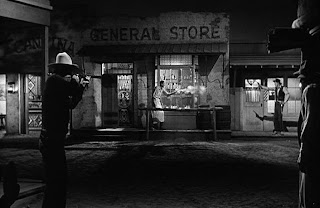 The action of MWSLV takes place as an extended flashback, as now Senator Stoddard and Hallie return to Shinbone after many years to attend the funeral of Tom Doniphon, who has been forgotten in the town. With statehood, and the advance of the modern world there was no place left for a dinosaur like Doniphon, and he just faded away. There’s one throwaway line about the dead man that is telling: “He hadn’t worn a gun in years”. He knew his time had passed.

The film makes a point of showing Hallie returning to Doniphon’s old homestead, now in ruins. At one time, Doniphon was building an extension on the house, in anticipation of his marriage to Hallie. As she sees the old house, there’s a definite sense of sadness and regret in her eyes, as she contemplates this man who she once would have married. She doesn’t even know that Doniphon gave her up so that she could have the life of comfort with Stoddard.

The thing about Ransom Stoddard, then, is that he is a fraud. His political career and his marriage have been assisted by the lie that he killed Liberty Valance. When he tries to set the record straight, nobody wants to hear it. As a newspaperman tells him, “When the legend becomes fact, print the legend.” I think that this inner conflict fuels Stoddards proposal on the train ride back to Washington. He suggests that they move back to Shinbone after he gets his latest bill through the Senate, and I love watching the dynamic between the two here. He knows that he owes everything to Tom Doniphon, and his suggestion that he comes back and “Maybe open a law office” is a nod to Doniphon, and to his wife, who never completely got over the other man. Her response says it all. “Oh, Rance! You don’t know how I’ve longed to hear that!” In essence, Stoddard is giving Hallie back to Doniphon.

John Ford admitted after making Liberty Valance that he wanted it to have the look of a silent film. This harkens back to his desire to pull the rug out from under the suppositions that the audience would bring to a Western. Thus, Ford foregoes the stunning location photography of films like The Searchers and My Darling Clementine, and gives us a studio film. If you look at the characters, you’ll see silent film stereotypes everywhere. Marvins’ Valance is one, for sure, and so are the oafish Marshal played by Slim Pickins and the politician played by John Carradine. Ford was saying, “Pilgrim, This may look like the old West, but it’s not.”
IMDb

Posted by Jeff Duncanson at 8:08 p.m. No comments: 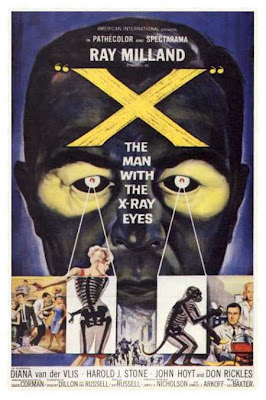 The Set-Up – Roger Thornhill (Cary Grant) is dropped off in the middle of nowhere for a meeting.

Every once in a while, it’s a good idea to refresh oneself on what a genius Alfred Hitchcock was. To create tension onscreen, many lesser filmmakers rely on crutches: Ominous music, shadows, claustrophobic set design. Fair enough – Those things work. Now consider this great sequence from North by Northwest. It is set in the middle of the day in a wide open space. There’s the tiniest bit of music, there’s barely any dialogue, and the only other character is quite obviously not a threat. Hitchcock creates unease with a LACK of unease, and that’s a neat trick, indeed. Check it out, there’s a car, which merely speeds by. Then another. There’s a brief shot of a crop duster, but nothing alarming about it. Another car appears from an area that we don’t expect, and drops off the other man. There are a few seconds, as the camera holds on the two of them on opposite sides of the road, that a bit of tension creeps in, but when Grant goes to talk to him, he is so harmless that it throws us off. It’s only when the other man says “That’s funny...That planes’ dustin’ for crops where there ain’t no crops.” that we really feel the vice tighten. This whole scene is drawn out over 10 minutes of screen time, and like I said, there is virtually no dialogue or music. It’s absolutely masterful in the way it manipulates the viewer.

Posted by Jeff Duncanson at 5:16 p.m. No comments: 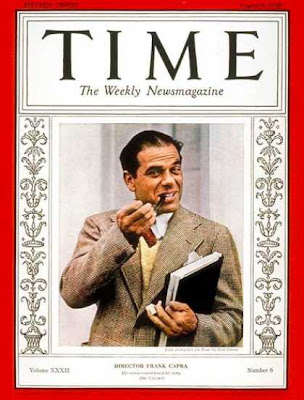