Torch Singer – Another Paramount pre-code film. This 1932 offering has Claudette Colbert as an unmarried singer who has a baby out of wedlock, gives it up, then becomes a torch singer and finally a radio star, before deciding that she wants to find her daughter. This was surprisingly good, and quite poignant. Recommended. 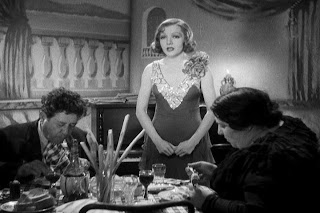 I Fidanzati – My first exposure to the work of Ermanno Olmi, and it won’t be my last. Clocking in at less than 80 minutes, this simple story of a young couple separated by a job transfer packs a huge amount of loneliness and longing into its little frame. The dialogue is sparse, so Olmi illustrates his main characters thoughts through simple little flashbacks, and quiet observation. A brilliant film, highly recommended. 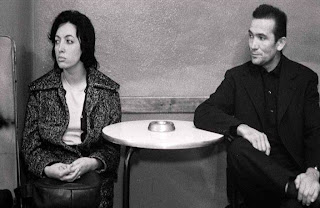 Milk – Gus Van Sant’s examination of the life of murdered gay politician Harvey Milk. Sean Penn is superb in the title role, as is Josh Brolin in the role of the troubled Dan White. I loved the way the film doesn’t just take the easy way out with the White character, making him a homophobic psycho. There are levels to this guy that the movie hints at, but doesn’t spell out, and it the film is the better for it. Recommended. 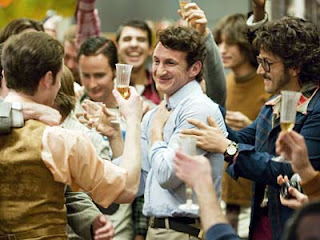 Posted by Jeff Duncanson at 6:53 p.m. No comments: 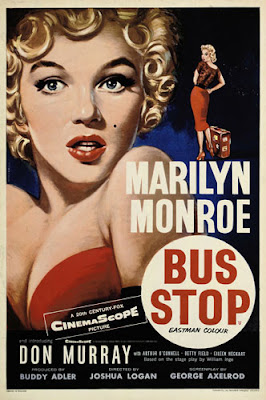 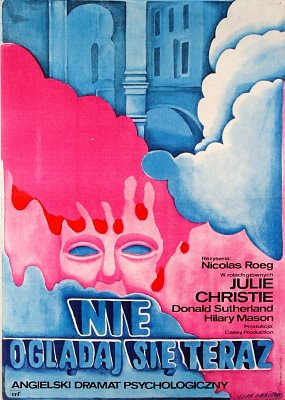 Touching the Void - This retelling of the disastrous 1985 Peruvian mountain climbing expedition of Brits Joe Simpson and Simon Yates is a great illustration of the value of insane pig-headedness. Played by actors, and narrated by the actual men, there isn't any suspense about the outcome of their ordeal, but it's a riveting story nonetheless. That's because Simpson keeps on going long after most normal people would have just curled up and died. Did I say long after? Make that long, long, LONG after. Beautifully photographed and highly recommended. 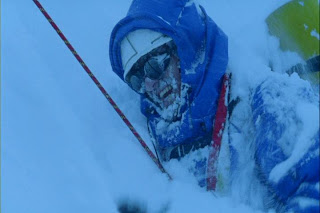 Posted by Jeff Duncanson at 5:21 p.m. No comments: 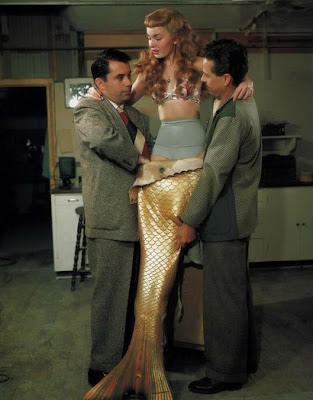 Bud Westmore (L) and William Powell (R) help Ann Blyth into her mermaid gear. The film is Mr. Peabody and the Mermaid, from 1948.
Posted by Jeff Duncanson at 5:40 p.m. No comments: 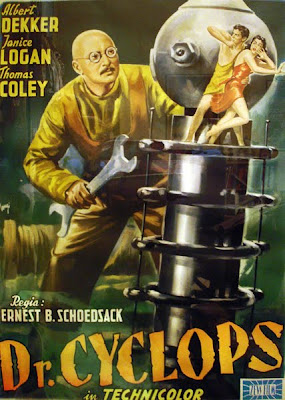 Posted by Jeff Duncanson at 9:35 p.m. No comments: 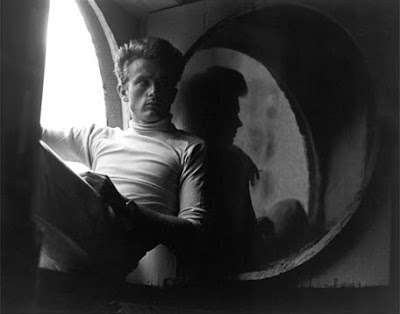 Posted by Jeff Duncanson at 5:15 p.m. No comments: 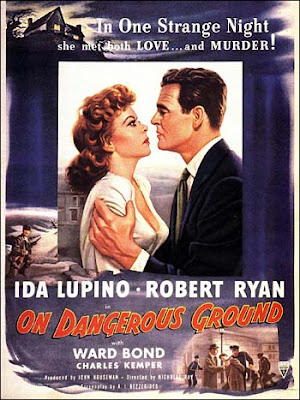 Posted by Jeff Duncanson at 3:27 p.m. No comments:

On Dangerous Ground – Yet another Robert Ryan film. He stars here as a violent, troubled cop who meets a beautiful blind woman during a murder investigation and falls in love with her, changing his life. This might be the best I’ve seen from Ryan. The film has two distinct parts – In the opening, Ryans’ rogue cop bulldozes his way through life. The second portion takes place in a snowy countryside, and his scenes with the blind woman (Ida Lupino) have a touching tenderness. Nicholas Ray directed this often-overlooked gem. You should check it out. Added note – Ward Bond has a large supporting role as the father of the murder victim. 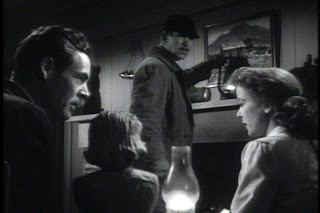 Great Expectations - The David Lean version from 1946 is still the gold standard film of Dickens' great tale. Dickens is Dickens because of his supporting characters, and Francis L Sullivan as Jaggers, Marita Hunt as Miss Havisham, and Finlay Currie as Magwitch look like they could have been cast by Dickens himself. Highly recommended. 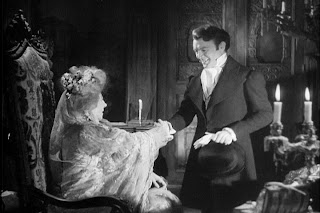 Hot Saturday – This is a “pre-code naughty bit”. Fun-loving girl (Nancy Carroll) plays two suitors (Cary Grant and Randolph Scott) off against one another. The naughtiness is whether or not she has pre-marital num-nums with Grant. (She doesn’t…and then she does). This one is only of mild interest. Jane Darwell, who later gained fame as Ma Joad in The Grapes of Wrath, plays Carroll’s mother. 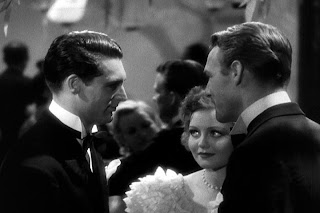 Posted by Jeff Duncanson at 3:41 p.m. No comments: 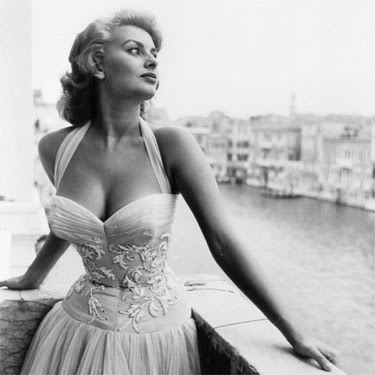 Sophia Loren
Posted by Jeff Duncanson at 6:45 p.m. No comments: 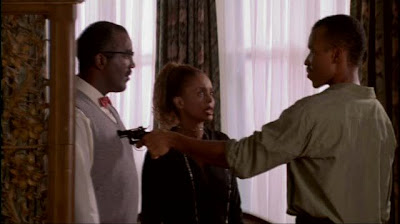 Tell me about Hosea.
You're too young to understand. But when I was with Hosea, it was like my whole body was burning. I'd come home and I'd have to rub ice on my face and neck to cool down. If Maynard knew he never said a word. And then one night, Hosea showed up at the door. He said, "pack your bags, woman, I've come to take you with me." And God help me... I pushed past my startled husband, I was going upstairs to pack my bags when I heard Maynard say in a tone I'd never heard him say: "I don't care who you are, sir, but if you do not leave my house at once, I will hurt you." And I turned just in time to see Hosea pull the gun out and aim it at Maynard. "I'm in love with your wife and if you try to stop us, I'll kill you..." Maynard walked right up and pushed his chest in the barrel of the gun. And he said, "Well, you'll have to kill me, 'cause my wife ain't going nowhere." Oh, Eve...in that moment, I knew that I loved Maynard! He was so calm and brave, and it was Hosea who was trembling. Maynard said, "Mozelle, tell this man you ain't going nowhere with him--so he can get the hell out of my house." Mama was standing in the doorway of the kitchen and she was holding her heart like this. I walked slowly over ...and I stood next to my husband. I looked at my lover: this man who had lit this great fire in me, and I said, "Please leave our house. I never want to see you again." Hosea's eyes went another color. He stopped trembling. He looked right at me. And he said, "All right then." And he shot Maynard in the chest. And I was alone. For awhile.
Eve's Bayou - screenplay by Kasi Lemmons
Posted by Jeff Duncanson at 5:14 p.m. No comments: 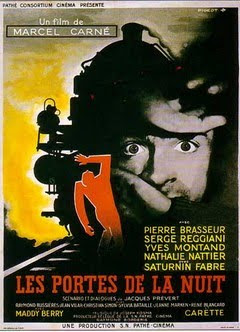 In the arena of political thrillers, there’s one film that is the proverbial 900-pound gorilla – The one that dwarfs everything else. That would be John Frankenheimer’s 1962 masterpiece The Manchurian Candidate. 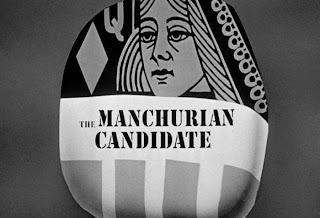 This film is in my personal pantheon because it does such a great job of creating a disquieting nightmare onscreen. The skeleton of the story is a realistic one involving ambition and political machinations. In its fleshed-out final form, however, it rotates ever so slightly towards fantasy, creating an unforgettable dream-like tableau. 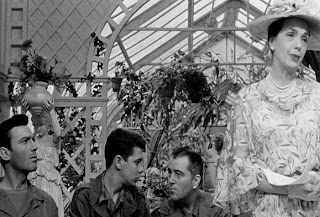 The film opens with an army squadron being betrayed and being captured by the enemy. We go to the opening credits. Then, we see Raymond Shaw (Laurence Harvey), who was one of the captured soldiers, being feted as a homecoming hero. So, how did the men escape? Then there’s the famous “Garden party”, where we see the men, still in uniform sitting in on a ladies discussion on hydrangeas. It takes a while to register that this is related to the soldiers’ brainwashing sessions. This jumbling of timelines, and switching between reality and dream is meant to disorient the viewer. It works.

Harvey’s portrayal of the cold, brittle Shaw is one of my favorite performances. Laurence Harvey was an interesting actor. Despite being hugely handsome, he invariably came across onscreen as a cold fish. That persona dovetails perfectly into the character of Raymond Shaw. At the aforementioned rally, Shaw’s mother (Angela Lansbury) and stepfather (James Gregory) are quick to attach themselves to him. He’s having none ofit, even proclaiming to the peporters present “He is NOT my father!” The distain that Raymond feels for these two comes off him in waves. 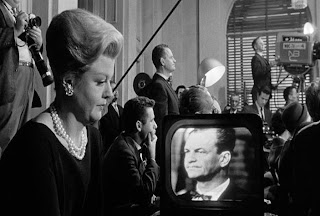 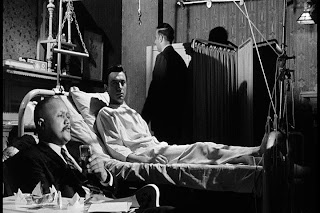 Then there’s the other landmark performance in TMC – That of Lansbury as the scheming mother. If you only know her from her TV fare like Murder, She Wrote, then this film is going to be a shocker for you. This is a lady who is thinking large – She wants control of the White House, and there’s nothing she won’t do to get it, including turning her son into a killer.

If you’ve read filmscreed much, you will recognize that I am someone who tries to see “sub-plots” everywhere. As such, The Manchurian Candidate is manna. First of all, there’s the Janet Leigh character, who dumps her fiancée after a 5 minute meeting on a train with Frank Sinatra’s Ben. The theory gets floated that she is also a Manchurian controller, and when you watch her initial conversation with Sinatra, it sure seems like he could be in a trance. The film dangles this possibility, but doesn’t go anywhere with it. 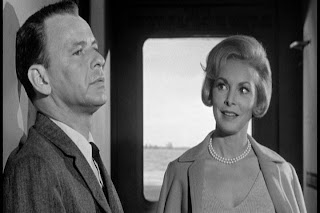 Then there’s the matter of Raymond and his mother. As I noted earlier, he has a pure, unalloyed hatred for her. I guess she loves him, but it’s a love that is all tangled up with her own agendas. She uses her control over him to force him to kill her chief rival, and also the man’s daughter – who happens to be the woman whom Raymond loves. I haven’t read the Richard Condon novel, but I know that Raymond beds his mother in it. The film naturally doesn’t go that far, but it offers a tantalizing hint in the form of a decidedly non-chaste kiss that mother lays upon son. 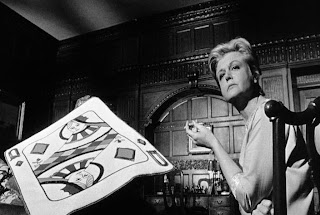 I just can’t say enough about the finale, as Sinatra rushes to try to thwart the assassination. I’ve seen this movie at least ten times, and although I know exactly how things are going to turn out, I still get drawn in. Frankenheimer turns the screws expertly and the tension amps up and up – and then he pulls the rug out from under us. And I love it when that happens.

Posted by Jeff Duncanson at 5:05 p.m. No comments: