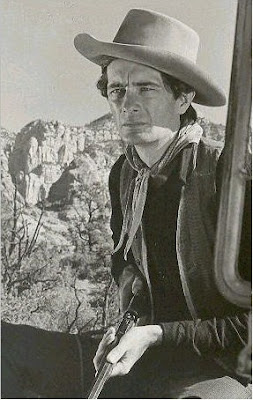 It’s pretty simple, really. If you have watched a movie or a TV show, you have seen Royal Dano. The Internet Movie database lists 169 credits for the scarecrow-like character actor in a career that began in the early fifties, and continued right up till his death in 1994.

Dano lent his spectre-ish presence to scores of Westerns, often as a heavy. He’s there in the background as one of the Dancin’ Kid’s gang in Johnny Guitar, or in Anthony Mann’s Bend in the River and The Far Country. His TV resume touches on all the high points of the Golden Age of TV Westerns: Bonanza, Rawhide, Wanted: Dead or Alive, Have Gun, Will Travel, The Rifleman, Gunsmoke, and The Virginian.

Dano didn’t find his signature role, however, until late in his career. That was in Philip Kaufman’s The Right Stuff. He has very little time onscreen, but his “Angel of Death” (The man who informs the families when one of the pilots perishes) is one of the truly memorable images in that film. With his undertaker’s mien and his black suit, Dano is the last man you want to see coming up your driveway. 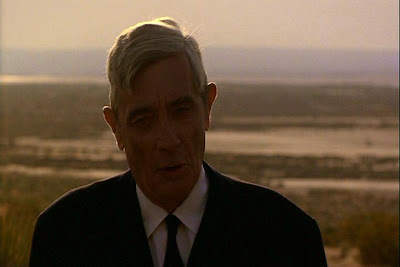 Other Dano film credits include: The Trouble With Harry, Moby Dick, King of Kings, and as a sputtering lunatic in Kaufman’s The Great Northfield, Minnesota Raid.

How about Ward Bond? He has appeared in more best picture nominees than anyone else I looked up.