In sitting down to write a commentary on Andrei Tarkovsky’s Stalker, I have to confess feeling inadequate to the task. Don’t get me wrong - I love the movie, but this is a film that gives the viewer the gnawing feeling that everything he thinks he knows about it could be completely wrong.

Made in 1979, Stalker is ostensibly a Sci-Fi film about two men who venture into a mysterious “Zone", with the help of a guide called a stalker. A prologue tells of how a meteorite hit the earth, how soldiers went to check it out, and never returned, and how the area was closed off. It would seem to be the launching point for a story of the adventures that the three men encounter in the dangerous zone. The adventure that the two travelers undertake isn’t fraught with monsters and guns, however, but rather with hard existential questions.

The two men are a writer and a scientist, who are simply known as Writer and Professor. Their reasons for wanting to go to the zone are easily understood. The writer, a hard drinking, womanizing burnout, wants to rekindle his passion. The professor wants to confront something unknown and learn from it, as is the wont of a scientist. There’s another goal, as well - A room in the Zone where all dreams come true. 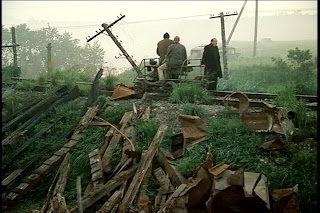 The zone itself is not what we might expect. The film’s opening passages are filmed in a sepia tone, but when it moves into the zone, it switches to color. It looks a lot like the kind of beautiful country setting where you might go hiking, except for the charred shells of tanks and other military vehicles that are lying about. What happened to the tanks? The film doesn’t tell us, and doesn’t seem to be very interested in the so-called dangers present in the zone.

The stalker is a curious fellow – Did I mention that? He is an ex-convict who makes his living guiding people into the zone. He is full of warnings and threats against the other two about what will befall them in the zone if they don’t listen up, but it gradually dawns on us that for a place with such a fearsome reputation, the Zone is pretty tame. There’s a scene where the men see the destination they are seeking just a couple of hundred yards away, but the stalker insists that they have to approach it from another direction, rather that the short way. There’s also a scary-looking tunnel called the Meat-Mincher, which turns out to be, well, just a tunnel. 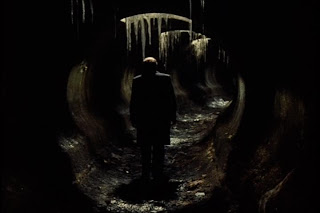 The story that is really being told here is about the process of enlightenment, and the quest for a spiritual summit. That’s why the room had to be approached from a different route – It’s the journey that’s important, not the destination. The room represents the Holy Grail, and as they get closer to it, the two men start to question if they really want it. The writer talks about how art comes from suffering, and if he were able to have anything, what the hell would he write about? 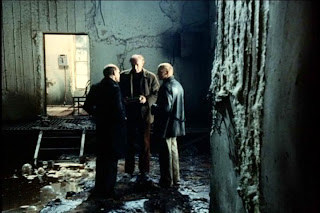 The stalker talks about a figure known as Porcupine, who was his mentor, made it to the room, became rich, and then committed suicide. Stalker is never more murky and impenetrable than when it concerns this character. There’s never any real detail about him, such as who he was or where he came from. He simply exists as a reminder of the pitfalls of being given everything you want. I think.

Stalker is a difficult, yet rewarding film. It illustrates how we work towards what we perceive as our own spiritual utopias, and how we are so hard to satisfy. There’s a marvelous little scene where the Writer has survived a potentially dangerous passage, and the stalker congratulates him. “You’re going to live 100 years!”. The Writer replies, “But why not forever?”

Is it be or is this film all over the place suddenly? Was it re-released? I saw this movie I guess 10 years ago or so, and was genuinely not impressed. slow droning walks as a man prods a stick into the earth checking for mines, made me realize that high- art often had a price: boredom. Now, in my older more patient years, my film study is far more sincere than it ever was, and I know I'll give it another chance someday, but I'd like to hear one critic tell me they hated it, or fast-forwarded through much of it...

I think this was my fourth time, and I to have admit that the first two times, I needed a couple of sittings to get through it. Stalker requires a bit of heavy lifting (as does all of Tarkovsky).I requested Steve Carlson to look at "Mirror" on his blog for that very reason - I wanted to see if someone else found it as murky as I did. After reading his thoughts on it, I want to see it again, as well. I will readily admit that he is an acquired taste (Tarkovsky, not Steve), but I have found that I have always wanted too see his films multiple times.

But that's what's odd, I absolutely loved most of the decalogues I've seen. Especially the first one, and really looking forward to seeing more in a month or two

just thought you'd like to know, you made the top of the Squishlist

I did see that - Thanks very much!

Aw, I wanna be an acquired taste...

And wait... isn't The Decalogue by Kieslowski? Or is that one o' them humor jokes that my sad pedant ass has heard so much about?