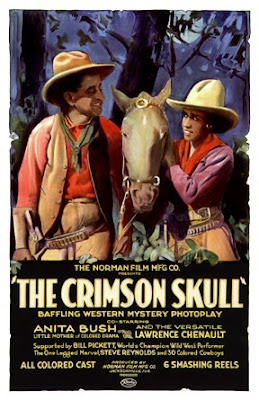 With an "all colored cast". This poster is a relic from an all but forgotten era, when there was a small black film industry running parallel to Hollywood. In those days, mainstream Hollywood mainly confined black performers to small, caricitural, "Stepin Fetchit"-type roles. The black film industry sprang up as a counter-balance, routinely featuring black casts in conventional stories.

In the coming weeks , I'll feature posters and images from the "other" Hollywood. Check out the website Midnight Ramble for more info on this era.

VEry nice study subject Jeff. The only two films I distinctly recall seeing as 'all coloured cast' as empowering and not blaxpoitation are Within Our Gates (1920), the first film directed by an African-American (I reviewed this terrible film actually) and The Wiz (also reviewed, also terrible). I'd like to hear of a couple good ones, i'll be watching!
And since you're such a fan of the marquis, I thought I'd share one I'll be using in an upcoming review. I don't know if you'd use this disco yourself, but I think it's great:
http://tinyurl.com/pqc4j

Very cool - I have a soft spot for those big bloated 60's-70's flicks like SG, Omega Man, Westworld,Planet of The Apes, etc.
When I was a kid, those types of films were the coolest thing going.